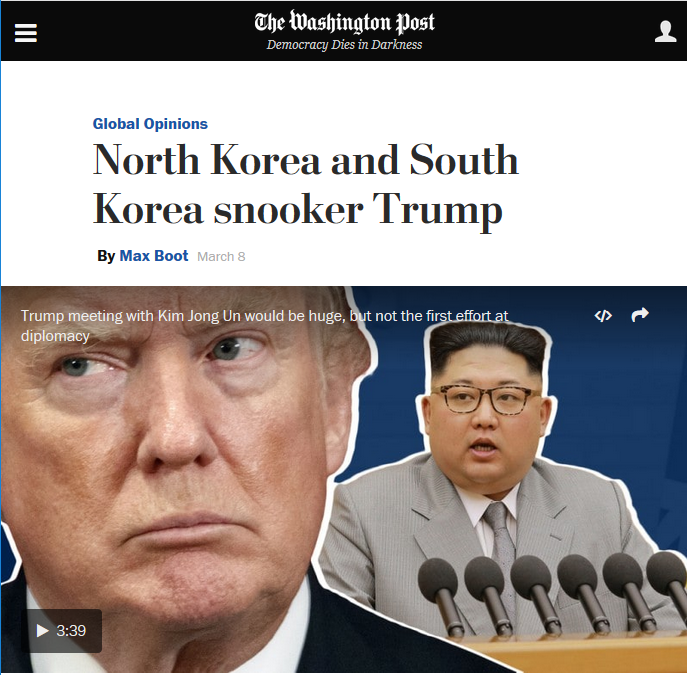 Washington Post‘s Max Boot (3/8/18): North and South Korea have “snookered the credulous American president into a high-profile summit that is likely to end in disaster one way or another.”

Commentators across the spectrum of acceptable establishment opinion are alarmed by the possibility of peace breaking out on the Korean peninsula.

Some oppose the idea of talks between US President Donald Trump and North Korean leader Kim Jong-un on principle. Washington Post columnist Jennifer Rubin (3/9/18), for instance, suggested that Trump should not meet with Kim:

Is Trump now to glad-hand with Kim, treating him as just another world leader? Will Trump even bring up human rights? (You will recall that, in 2008, then-candidate Barack Obama was ridiculed for suggesting he’d sit down with the North Korean dictator; he prudently backed off that idea.)

As recently as August, Trump tweeted: “The US has been talking to North Korea, and paying them extortion money, for 25 years. Talking is not the answer!” He was absolutely right.

Boot went on to contend:

What Boot sees as a doomsday scenario—peace between the two Koreas and the withdrawal from the peninsula of US troops, which serve as a constant threat to the North and thus ensure the permanent threat of war—is actually a formula for ensuring that there isn’t a second Korean war, one that is certain to be even more devastating than the catastrophic first one for Korea, and likely for the region and further afield. 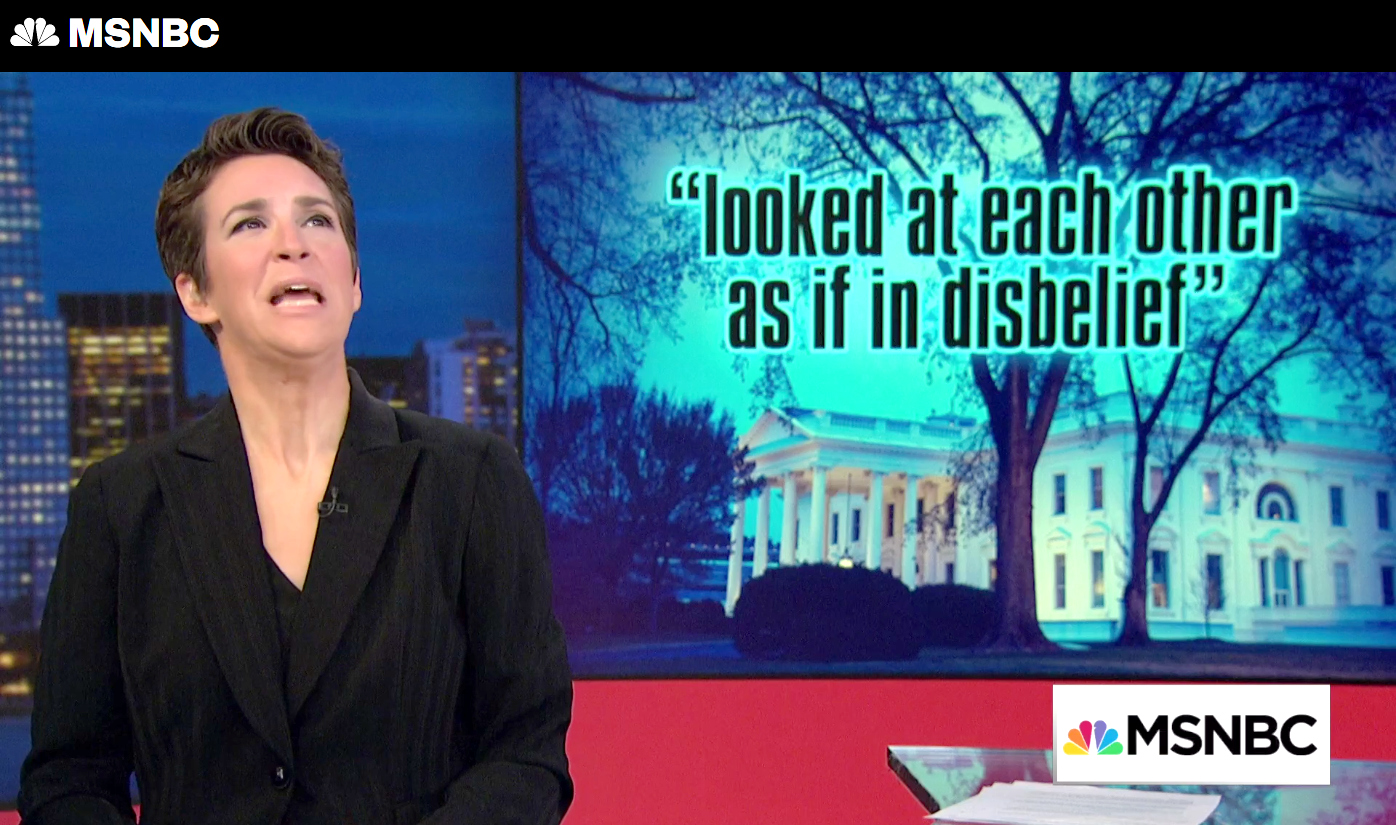 Rachel Maddow, the US’s most popular left-leaning TV host (MSNBC, 3/9/18), could not believe that the president would agree to hold talks with an enemy.

Rachel Maddow (MSNBC, 3/9/18) seemed flabbergasted by the prospect of a meeting between the leaders:

It has been the dream of North Korean leaders for decades now that they would advance their weapons programs and their nuclear programs so much so that the United States would be forced to acknowledge them as an equal and meet with the North Korean leader…. They got there with [Trump] and I don’t know that the administration intended it to be that kind of a gift. It’s just a remarkable time to be covering this stuff.

MSNBC blogger Steve Benen (3/9/18) says he’s “not opposed to direct diplomacy,” but he sounded like a time capsule from 1951 when he warned that

Trump has agreed to give Kim Jong-un exactly what he wants. North Korean leaders have sought this kind of meeting for decades because it would necessarily elevate the rogue state: It would show the world that North Korea’s leader is being treated as an equal by the Leader of the Free World.

New York Times columnist Nicholas Kristof  (3/9/18) also claims to prefer that the US and North Korea exchange words rather than missiles, but he expressed relief that the threat of peace was minimal: “It’s genuinely encouraging that Kim doesn’t object to the US resuming military exercises,” he wrote, but worried that America

has agreed to give North Korea what it has long craved: the respect and legitimacy that comes from the North Korean leader standing as an equal beside the American president.

For Maddow, Benen and Kristof, a catastrophic nuclear war likely to kill millions is less threatening than the (frankly remote) possibility of America treating a small Asian country as an equal. This sort of commentary shows that liberal analysts are every bit as capable of a chest-thumping jingoism as their counterparts on the right.

In Praise of Sanctions 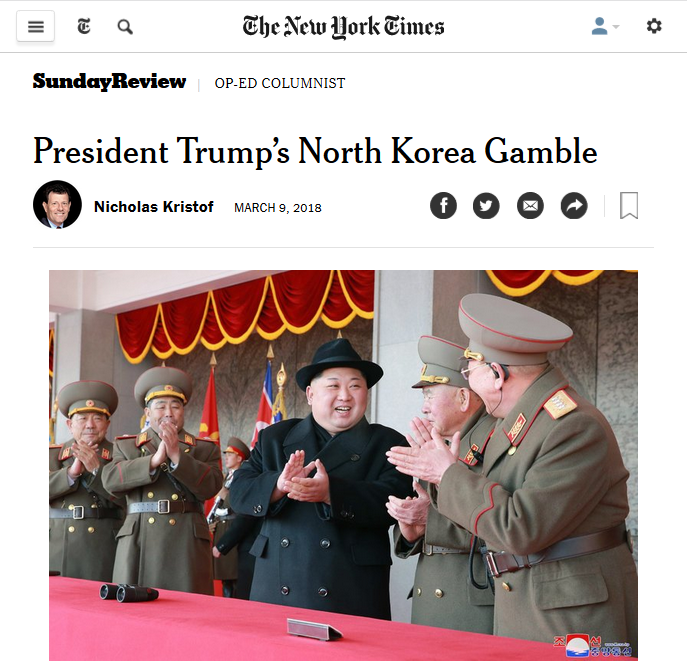 New York Times‘ Nicholas Kristof (3/9/18): “Give Trump’s approach some credit”—he “raised the economic pressure…and the pain was visible when I visited North Korea.”

Sanctions on North Korea make it harder for aid organizations to operate in the country, and for people living there to obtain drugs and medical supplies, such as anesthesia used for emergency operations and X-ray machines needed to diagnose tuberculosis (Washington Post, 12/16/17). Tomás Ojea Quintana, the United Nations’ special rapporteur on human rights in North Korea, says he is “alarmed by reports that sanctions may have prevented cancer patients from access to chemotherapy and blocked the import of disability equipment.”

According to Kee B. Park (12/18/17), a neurosurgeon at Harvard Medical School, the hunger in North Korea “is devastating. And it’s our fault. Led by the United States, the international community is crippling North Korea’s economy” by “banning exports of coal, iron, lead, seafood and textiles, and limiting the import of crude oil and refined petroleum products,” “punishing the most vulnerable citizens” of the country. For example, UNICEF says that “an estimated 60,000 children face potential starvation in North Korea, where international sanctions are exacerbating the situation by slowing aid deliveries.”

The Post’s Boot, however, is impressed by the sanctions, and worried that they might be lifted: “North Korea hopes at a minimum for a relaxation of sanctions just when they are beginning to bite.” In the interest of precision, he should have added “60,000 children” after the word “bite.”

It may make sense to talk to North Korea, but at a lower level, while maintaining the “maximum pressure” sanctions policy. Eventually the regime may feel so much pain that it will be willing to bargain in earnest.

North Korea doesn’t have the capacity to pain on the US, so it’s worth asking: Who will enforce hunger on America and destroy its economy to compel it to reverse its past approach (The Nation, 9/5/17) and “bargain in earnest” with North Korea? And would Boot endorse such an approach?

Boot can rest easy, however, about “so much pain” being reduced, as the Trump administration appears poised to maintain the sanctions until it determines that there has been “real progress” in the talks (AP, 3/13/18).

Kristof, like Boot, suggests that Trump “probably does” deserve credit for using sanctions to get North Korea to suspend tests of nuclear weapons:

First, Trump raised the economic pressure on North Korea with additional sanctions and extra support from China, and the pain was visible when I visited North Korea in September. Kim has made rising living standards a hallmark of his leadership, and sanctions have threatened that pillar of his legitimacy.

Kristof has made a career branding himself a bleeding heart concerned for the world’s most vulnerable but evidently his heart doesn’t bleed for “the most vulnerable citizens” of states that defy US dictates.