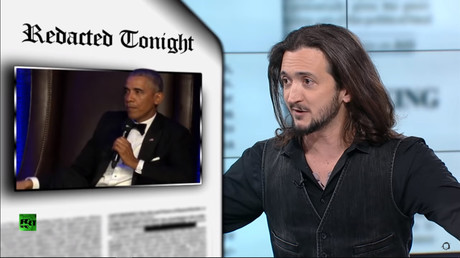 Big oil wrecking the planet and Wall Street greed plundering its wealth? Barack Obama wants you to thank him for that too. And if you don’t, host Lee Camp says, you’re just racist.

While Obama focused on green energy during his presidency – calling the move to renewable energy “irreversible” – the former POTUS was more than happy to take the credit for America’s increased oil production at a recent black-tie speaking event.

“That whole ‘America is now the biggest oil producer’…that was me people,” Obama said, displaying his trademark humility.

“Why aren’t you cheering?” Lee asks? “I think you aren’t cheering because you’re racist. You don’t think a black man can destroy the planet just as well as a white guy!”

What’s more, while enabling Wall Street’s worst excesses might be policy associated with Republicans, Obama was keen to remind the crowd that his presidency was great for traders and investors too. Although the average American saw his employment prospects drop and wage stagnate during the Obama years, President 44 wanted everyone to know that the fat cats got even fatter.

“Sometimes you go to Wall Street and folks will be grumblin’ about ‘anti-business’…I said, ‘have you checked where your stocks were when I came into office and where they are now? What are you complaining about?’” Obama riffed.

Watch the rest of this week’s episode below, featuring the Pentagon’s accounting problems, Mexico’s leftist president, and how a robot orangutan might make Oreos go extinct.