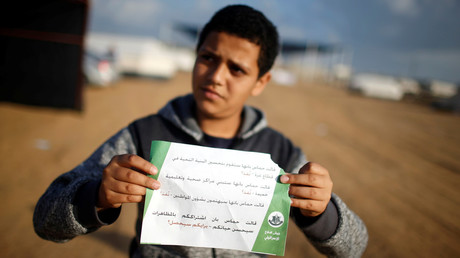 The US may soon add talking leaflets to their psychological warfare arsenal. The devices would play pre-recorded 30-second messages to whoever picks them up and may even soon listen back to the response they get.

A prototype of a weaponized version of a musical greeting card has been developed by the US Special Operations Forces Command, or US SOCOM, which unveiled it at an industry conference in Tampa, Florida, Defense One reported. The military now wants to find a partner, who would pick up the project and mass-produce the leaflets.

Dropping in sound messages rather than written ones could be quite useful when targeting illiterate people with whatever the US military want them to hear.

A letter screaming threats at you may be quite terrifying, as any Harry Potter fan can attest to after watching Ron Weasley receiving a ‘howler’ during his second year at Hogwarts.

But the leaflets will not only be used to intimidate enemy soldiers into defecting. The US military say they can, for example, be used to warn civilians about an incoming airstrike.

The final version that SOCOM envisions is a sheet about four times thicker than regular paper containing flexible micro-circuitry, including a speaker and a PV-battery. The publication speculates that the electronic part may be based on graphene, a conductive ultra-thin form of carbon that may revolutionize production of electronic devices in the future.

The US military is also thinking about including advanced features like an ability to serve as a communication device by listening back to what the recipient’s reaction is. They are also considering building in a biometric identifier to deliver individually tailored messages.