Two Los Angeles sheriff’s deputies have been sentenced to prison for covering up their beating of a mentally ill inmate. The incident was witnessed by a former recruit turned whistleblower.

Bryan Brunsting, 31, and Jason Branum, 35, both received prison sentences Monday after a jury in May found them guilty of conspiracy to violate an inmate’s civil rights, depriving him of his civil rights under color of authority and falsifying records after beating a mentally ill inmate then covering it up.

Brunsting was sentenced to 21 months in prison while Branum received five months. Both men were facing as many as 40 years in prison, but the sentences were lessened when a deal was made with Brunsting’s attorneys, dropping civil rights charges in exchange for the judge being allowed to consider the nature of his conduct while sentencing, the Los Angeles Times reported.

The case against Brunsting and Branum was dependent on the testimony of former sheriff’s department recruit Joshua Sather. When Sather came to the Los Angeles County Sheriff’s Department, he was considered an “honor recruit” who was at the top of his graduating class in the police academy, according to the Times.

Sather was under Brunsting’s supervision when he began as a recruit with the department. However, he claims that on March 22, 2010, things took a turn. While at the Twin Towers Correctional Facility, Sather was summoned by Brunsting who explained that an inmate, Philip Jones, had left his cell and was disrespectful to a staff member.

“We’re going to teach him a lesson,” Brunsting said, according to Sather’s testimony. They then went to a locked hallway that lacked surveillance.

Sather claimed that he initially tackled Jones and punched him but stopped when he saw that Jones was not resisting. However, according to his testimony, other deputies began attacking Jones while he allegedly was curled on the ground, screaming and crying.

“They kicked him, struck him, sprayed him with OC (pepper) spray,” Assistant US Attorney Lindsey Greer Dotson asserted. Jones suffers from schizophrenia and hears voices, according to KNTV. He did not testify at the trial.

When it was over, the deputies allegedly agreed to claim that Jones was combative in order to justify the use of force. Sather resigned just a few days after and went to work in oil fields in Colorado, the LAist reported.

The entire story may have gone untold if Sather had not decided to confide in his uncle before he left. His uncle, Steven Sather, was a veteran sheriff’s detective who attempted to intervene on his nephew’s behalf. Joshua reached out to him shortly after the incident, and his uncle encouraged him to do the “right thing,” according to a district attorney’s memo obtained by the Times. 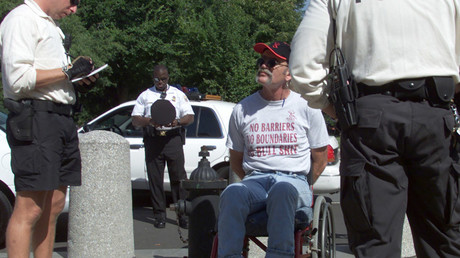 The next day, Steven was concerned that Joshua would resign and went to Twin Towers with his partner to try to talk Joshua into staying. However, when they arrived they were informed that Joshua had already resigned. Brunsting, present in the watch command office, had a heated exchange with Steven where he allegedly said, “If my nephew doesn’t decide to come back to the department, I’m gonna find you and put a bullet in your head.”

In turn, Brunsting reported Steven for threatening his life, but prosecutors declined to press charges against him.

The defendants claim that force was necessary when handling Jones and attempted to paint Sather as an unreliable, dishonest witness who “had his script, he told his story and made it as dramatic as he could,” Brunsting’s attorney, Richard Hirsch, said in closing arguments. Focused on inconsistencies, such as whether or not Jones was “scooting” on the floor during the assault, Hirsch claimed, “You’ve heard so many stories, you can’t tell which, if any, are true.”

However, it only took jurors 90 minutes to return a guilty verdict in May.

This isn’t Brunsting’s first run-in with excessive force. In 2009, he allegedly choked an inmate and then wrote a report in the name of a trainee deputy. Hirsch also argued that Brunsting had never received proper training in handling mentally ill employees in his tenure at the department.

Hirsch also presented a different side of Brunsting to the judge by offering 31 letters from family, friends and coworkers.

Branum’s attorney also tried to get the judge to focus on his merits, such as his time in the US Army when he allegedly ordered his crew to not fire on Iraqi civilians who had broken curfew.

This comes at a critical time for the Los Angeles County Sheriff’s Department. An FBI investigation into the jail system has reached the highest levels of the department, including department veterans and even former sheriff Lee Baca.