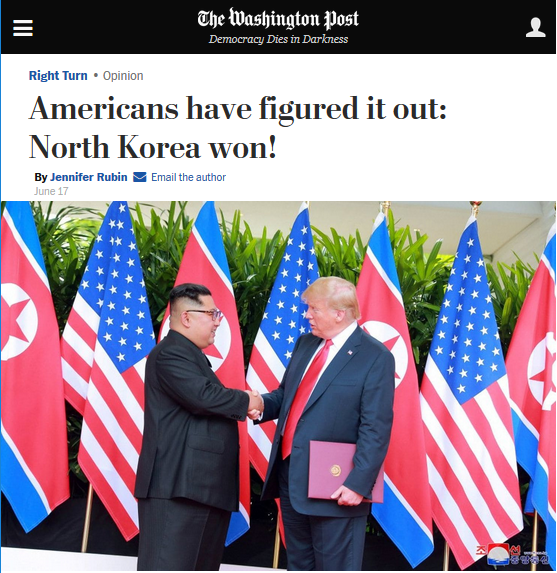 The Washington Post‘s Jennifer Rubin (6/17/18) epitomized the zero-sum takes of US pundits.

Three major US papers—the New York Times, Washington Post and Wall Street Journal—had only one Korean-authored op-ed out of 41 opinion pieces on the subject of the Korean peace talks.

The Post had 23 total opinion pieces, the Times had 16 and the Journal four. The only op-ed by a Korean was a pro-summit piece on June 12 by Moon Chung-in, an aide to South Korean President Moon Jae-in. Of the 41 editorials or op-eds only four (9 percent), were broadly positive about the Trump/Kim summit, 29 (70 percent) were negative and eight (21 percent) were mixed or ambiguous. The full list, current as of June 19, is here.

As FAIR noted in May (5/7/18), there’s a huge chasm between how recent peace efforts are being received in ostensible US ally South Korea and how they’re being covered in US media. As we noted at the time, polling shows 88 percent of South Koreans in favor of these efforts, while the person spearheading them, President Moon, holds an 86 percent approval rating. But the bulk of US coverage ranged from snide dismissal to outright opposition (FAIR.org, 6/14/18).

Similarly, a poll taken after the Singapore summit found that 66 percent of South Koreans were pleased with the results, and only 11 percent opposed them. This contrasts sharply with the reaction in US newspapers, which has been overwhelmingly negative in tone, and dominated by NatSec-centered horse race takes over who “won.”

The New York Times published one pro-summit piece, by Victor Cha (6/12/18), and it was a very qualified and conflicted. The Washington Post was mostly negative and skeptical, with three exceptions: predictable partisan cheerleading from reliable Trump apologist Marc Thiessen (6/15/17); a measured “wait and see” take from Michael O’Hanlon, a fellow at the Brookings Institution (6/13/18); and the aforementioned piece by President Moon’s aide. The Wall Street Journal’s commentary was uniformly negative.

This raises an important question: Why? What do US pundits know that those with something actually at stake—Koreans—don’t know? 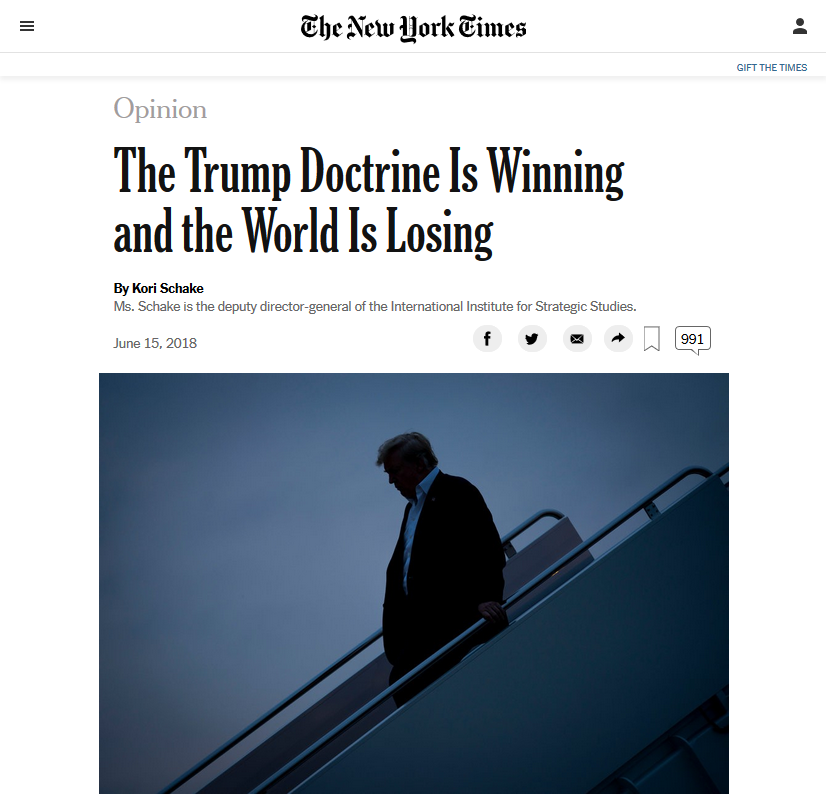 One factor is that our media system turns to professional “experts” at a small handful of establishment think tanks, and these are often funded by monied interests with a vested interest in particular kinds of policy (Extra!, 7/13). On international questions, this often means the arms industry, who are major funders of think tanks like the Center for Strategic and International Studies (CSIS) and the International Institute for Strategic Studies (IISS). These think tanks produced predictably hawkish putdowns of the summit, such as CSIS’s Sue Mi Terry, who told MSNBC’s Nicolle Wallace, in a rare moment of candor:

A peace treaty is not OK. That should come at the end of the process, because a peace treaty, while it sounds great and could be historic, also undermines the justification of our troops staying South Korea.

The “justification” for troops also happens to be the justification for the weapons systems they come with, namely those of CSIS’s major donors Northrop Grumman, Lockheed Martin and Boeing (FAIR.org, 5/8/17).

Another part of the problem is partisanship. US pundits overwhelmingly view the Kim/Trump summit as a Trump-led or US-directed event, rather than an essential but limited part of a broader peace effort being undertaken by the Koreas themselves. This means the majority of the coverage is based on whether or not the US “won” or “advanced its interests,” not what’s good for the actual people who actually live on the Korean peninsula.

This is an understandable impulse. As Trump increasingly threatened immigrants, citizens of US war zones and a whole host of vulnerable populations, the instinct to oppose anything connected to him is excusable. But in the case of Korea, where Trump is simply one part of a broader peace strategy pursued by and for Koreans, this has led to a dangerous habit of trying to outflank Trump on the right. This is often achieved through traditionally right-wing tactics, like calling him “weak,” saying he’s “giving away too much” or some other such chest-pounding bromide.

As FAIR noted last week (6/14/18), MSNBC’s most popular liberal commentator, Rachel Maddow even cooked up a theory that this was all to help the bogeyman of Russia, because that country shares a small land border with North Korea. 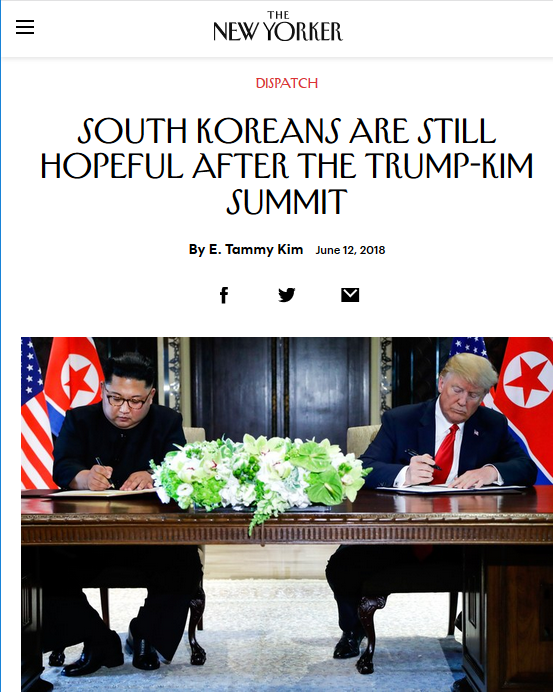 Occasionally, some perspectives from Korea got through in US media, like a piece by E. Tammy Kim in the New Yorker (6/12/18) that relayed South Korea’s general sense of cautious optimism, a mood mostly reflected in opinion polls:

South Koreans do not trust Kim or Trump, or believe in the possibility of a quick reunification. They are simply aware of the toll that 70 years of national division have taken, and are eager for an alternative future.

It would be useful for major curators of opinion in the United States—whose military personnel still total 36,000 on the peninsula—to every now and then reach out to those affected by our foreign policy, rather than limiting the scope of debate to partisan pot shots and zero-sum takes. There’s a measurable, massive distance between how these peace efforts are received in South Korea versus how they’re covered stateside.

Perhaps editors and producers in major US media, instead of booking Max Boot or commissioning another arms industry-funded think tank mercenary for the 145,090th time, should ask themselves why that is, and who is served by it.