Trump’s lawyer Rudy Giuliani has risked causing another diplomatic uproar after he claimed that North Korean leader Kim Jong-un was “on hands and knees,” desperately trying to save the June 12 summit after Trump briefly withdrew. 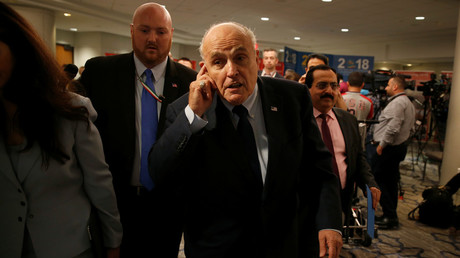 Lately, Giuliani has become an avid foreign policy commentator despite not being authorized by the US president, and his long-time friend, Donald Trump to speak on foreign matters. The former New York City mayor, who was hired by Trump in April to deal exclusively with the Mueller probe, raised eyebrows last month when he implied that the US president was keen on fomenting regime change in Iran. Although the State Department promptly disowned Giuliani’s comments, reports have emerged that Trump is growing increasingly frustrated with Giuliani for getting him bad press.

However, on Wednesday, the lawyer was at it again, telling a business conference in Tel Aviv that Trump has a head start in the much-anticipated meeting with Kim, as it was allegedly the North Korean leader who had to do the begging to get the meeting back on the table.

“Well, Kim Jong-un got back on his hands and knees and begged for it, which is exactly the position you want to put him in,” Giuliani said, as reported by the Wall Street Journal. Considering how Vice President Mike Pence’s remark about a “Libyan scenario” enraged Pyongyang last week, there is a reason to watch out for what comes from Giuliani’s undiplomatic outburst for the future of the Singapore meeting.

The remark has seen Twitter exploding with a predictable barrage of criticism towards Giuliani, with many fearing that his reckless rhetoric could jeopardize the Singapore summit, which was already cancelled once.

Some suggested Giuliani hammered the final nail in the coffin, arguing that there’s no way Kim will not take offense.

Seriously? Are they trying to get Kim Jong Un to cancel the Singapore Summit? Because Giuliani spouting this stuff is a great way to do it.https://t.co/Qr1GTsLjYA

“I’d be surprised if the NK summit still happens after Giuliani said Kim Jong Un got on his knees and begged,” one Twitter user wrote.

Others pointed out that Giuliani’s frequent interventions in matters that he has no expertise in, or is not eligible to speak on, might be a sign of his growing appetite for a senior post at the White House, which Trump is unwilling or unable to provide.

Giuliani desperately wanted to be Secretary of State or AG. Passed over for both positions and reduced to Trump lackey, he is now interfering in sensitive international affairs while lying about legal matters in the US.

Press should cover *that*, not give Giuliani free rein.

Giuliani himself has shown no remorse for risking Trump’s major diplomacy achievement.

He said he does not expect his words to hurt the North Korean leadership so much that they walk out from the summit. “The only ones sensitive about this are the media,” he said in a telephone interview with AP, stressing that his words were “a metaphor” and they have “nothing to do with the administration.”