Judge Brett Kavanaugh denied all accusations he sexually assaulted a woman in high school, saying he bears no ill will to his accuser. His ire was reserved for Democrats, whom he accused of “search and destroy” tactics.

Facing the Senate Judiciary Committee on Thursday afternoon, following a testimony from Dr. Christine Blasey Ford, Kavanaugh denied her allegations “categorically and unequivocally.” While repeatedly saying he bore Ford “no ill will” and did not question that she may have indeed been sexually assaulted by someone, Kavanaugh insisted it had not been him. “I am innocent of this charge,” he said.

His anger was reserved for the committee Democrats. “This confirmation process has become a national disgrace,” he said, addressing them. “You have replaced ‘advice and consent’ with ‘search and destroy’.”

READ MORE: As it happened: Kavanaugh and his accuser Ford testify before Senate Judiciary Committee

Tears and ‘no ill will’

“This whole two-week effort has been a calculated and orchestrated political hit, fueled with apparent pent-up anger about President Trump and the 2016 election, fear that has been unfairly stoked about my judicial record, revenge on behalf of the Clintons and millions of dollars in money from outside left-wing opposition groups,” Kavanaugh testified, also describing the proceedings as a “circus” and “grotesque and coordinated character assassination.”

The federal judge actually cried as he described the toll the allegations have taken on his parents, his wife, and his ten-year-old daughter, repeating that none of them harbor any “ill will” for Ford or her family.

“Little Liza, all of 10 years old, said to [Kavanaugh’s wife] Ashley, we should pray for the woman,” he said through tears, before recovering to lay out his record of public service and details about his high school and college years, dredged up by Ford’s accusations. 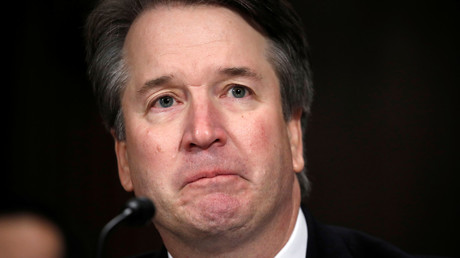 Several Democrat senators, including Sheldon Whitehouse (D-Rhode Island),  Amy Klobuchar (D-Minnesota) and Mazie Hirono (D-Hawaii) focused on claims that Kavanaugh was a heavy drinker in high school and college, and that he might not remember attacking Ford at a party because he had been drunk.

Kavanaugh, who said in his opening statement that he “liked beer” and still does, denied he ever got so drunk to not remember his actions. He asked Whitehouse what his preferred drink was (the senator did not answer), and even got into a spat with Klobuchar at one point, asking if she herself had ever been blackout drunk.

“I have no drinking problem,” Klobuchar said, dodging the question.

“Nor do I,” Kavanaugh shot back.

After a brief recess, the judge and the senator apologized to each other over any possible misunderstanding and mended fences.

Why not the FBI?

The other major point brought up by Democrats was a demand that the FBI investigate allegations against the judge. Sen. Dick Durbin (D-Illinois) sought to have Kavanaugh himself request the investigation from the White House.

“You know that’s a phony question,” Kavanaugh replied, explaining that he had undergone six FBI background checks that found nothing, and that in the end the decision on his confirmation would still be up to the Senate.

Chris Coons (D-Delaware) and Kamala Harris (D-California) also brought up the FBI, while Hirono submitted several letters from Democrats for the record, all demanding a FBI investigation.

After pressing Kavanaugh on the FBI question, Harris switched gears to land a punch, getting the judge to admit he had not actually listened to Ford’s testimony earlier in the day.

“I was preparing mine,” Kavanaugh replied.

Sen. Lindsey Graham (R-South Carolina), himself a military lawyer, set the bar for Republican questions by laying into the committee Democrats, accusing them of not caring for the truth at all and victimizing both Kavanaugh and Dr. Ford.

“This is the most unethical sham since I’ve been in politics,” Graham added.

“Boy, y’all want power. God I hope you never get it,” Graham added, addressing what he said were his former friends on the other side of the aisle. “You’re looking for a fair process, you came to the wrong town at the wrong time, my friend,” he told Kavanaugh.

Who leaked? And Democrats’ delay

Graham’s Republican colleagues focused on the fact that Sen. Dianne Feinstein (D-California) kept Ford’s letter secret for weeks, and failed to inform them of allegations through proper committee procedure even as her staff was instructing Ford to lawyer up and leaked it to the press.

That prompted Feinstein to protest, blaming the leak to the media or “beach friends” with whom Ford testified she discussed the claims.

“I did not hide Dr. Ford’s allegations. I did not leak her story,” the committee’s ranking member said. Neither did her staff, she maintained.

Sen. Orrin Hatch (R-Utah) called the way Kavanaugh was being treated a “national disgrace,” worse than the attacks on Clarence Thomas (who got confirmed) and Robert Bork (who didn’t).

Wrapping up the eight-hour session, Sen. Joe Kennedy (R-Louisiana) asked Kavanaugh to tell him the truth “before God and country.” Were any of the charges against him true?

None, Kavanaugh replied. “I swear to God.”

Within minutes, President Trump tweeted praise of Kavanaugh, calling his testimony “powerful, honest, and riveting” and quoting the judge’s own description of the Democrats’ strategy as “search and destroy.”

Judge Kavanaugh showed America exactly why I nominated him. His testimony was powerful, honest, and riveting. Democrats’ search and destroy strategy is disgraceful and this process has been a total sham and effort to delay, obstruct, and resist. The Senate must vote!

Trump, who had earlier told reporters he “could be persuaded” by Ford’s testimony, is now urging the Senate to vote and confirm Kavanaugh. According to rumors from Capitol Hill, this could happen as early as Saturday.