US Supreme Court nominee Brett Kavanaugh has denied the accusations he sexually assaulted a woman in high school and exposed himself to another in college, demanding a fair hearing to clear his name.

Kavanaugh, nominated by President Donald Trump to fill the vacancy on the Supreme Court created by the retirement of Justice Anthony Kennedy, was interviewed by Fox News’s Martha McCallum on Monday evening, alongside his wife Ashley.

“The truth is I’ve never sexually assaulted anyone, not in high school, not ever,” he said, responding to claims by Dr. Christine Blasey Ford that he attempted to rape her during a high school house party sometime in 1982.

Kavanaugh denied even knowing Ford, who was a couple years younger. “We did not travel in the same social circles,” he told McCallum. “I was never at any such party.”

When McCallum brought up the claim by attorney Michael Avenatti –most recently seen on CNN representing adult actress Stormy Daniels in a lawsuit against Trump’s lawyer Michael Cohen– that Kavanaugh was involved in setting up “rape trains” at high school parties, the federal judge was shocked, revealing that he was a virgin in high school and “for many years thereafter.”

“So you were a virgin?” McCallum asked. 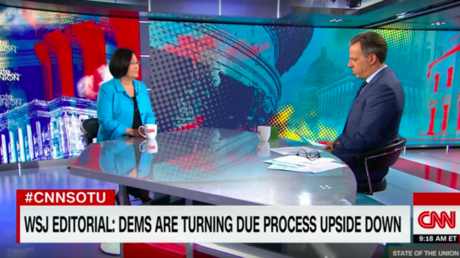 He refused to speculate on who might be behind manufacturing the accusations against him, and repeatedly demanded a “fair process, a process in which I can defend my integrity and clear my name.”

“I have faith in God and I have faith in the fairness of the American people,” Kavanaugh said. “I didn’t do this or anything resembling this. This is wrong.”

Ford’s claim against Kavanaugh surfaced after the Senate Judiciary Committee wrapped up his confirmation hearings, and has already delayed a vote on his confirmation. Since the letter went public, Ford has demanded a FBI investigation into her claims and tried to delay the hearing so she could drive from California to Washington, DC, due to reportedly being afraid of flying. She also demanded Kavanaugh testify before her at any Senate hearing.

Republicans have already rescheduled the hearing twice, and Senate Majority Leader Mitch McConnell (R-Kentucky) on Monday hinted that his patience might be at an end, calling the accusations against Kavanaugh a “shameful smear campaign” and vowing to hold a vote on his nomination.