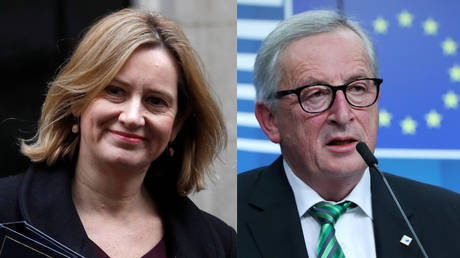 Juncker’s “grotesque” behavior, which included him bizarrely messing up a female offical’s hair, was lambasted by Rudd, who called for an investigation into whether that type of conduct ever took place in the UK.

“It’s grotesque. I mean, if that happened in our parliament I hope there would be a formal complaint,” said Rudd to The Telegraph.

Grotesque as it may be, it’s not uncommon, says Rudd, who often faked a cold just to keep the bear hugging officials at bay.

“When I used to go the EU for meetings, I often had a terrible cold to insist that I didn’t get enveloped in a bear hug. All the EU commissioners love doing their big hugs,” she added.

In the scathing report Rudd went on to described the EU official as “ghastly” and added that she took issue with the pictures of Juncker holding Prime Minister Theresa May’s shoulder while they were engaged in a tense conversation.

“What I minded before that were those pictures of the way he was holding the prime minister. I did not like that,” she added.