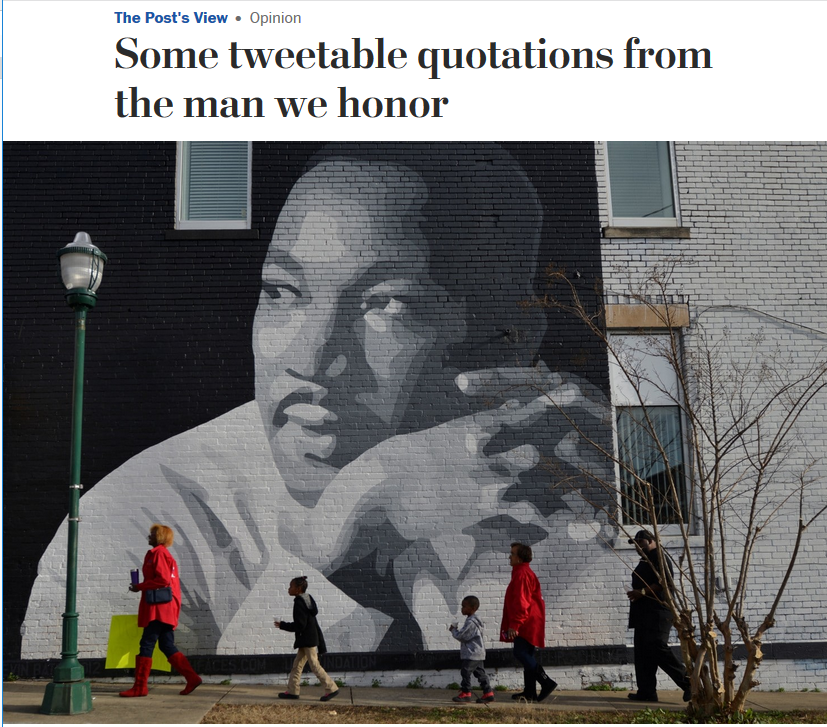 The Washington Post (1/14/18) picked some MLK quotes it felt would be ideal for tweeting, though “there was no Twitter then.”

The US empire’s most reliable ideological ally, the Washington Post editorial board, published on Sunday (1/14/18) one of the most saccharin and ahistorical Martin Luther King tributes in recent memory—which is saying a lot, given the crowded field. The Post editorial, headlined “Some Tweetable Quotations From the Man We Honor,” began by engaging in the very brand of decontextualized white liberal condescension MLK repeatedly opposed:

The wave of arson and looting [after MLK’s death] was the response, in our city and elsewhere, to the murder of the Rev. Martin Luther King Jr. in Memphis. It was a spasm of anger and despair at the loss of a seemingly irreplaceable leader, and it would have made King weep.

King, of course, saw in his lifetime scores of uprisings and riots in various cities, and not once did he claim they made him “weep.” Indeed, he repeatedly avoided such handwringing or scolding and instead, time and again, leveled his attention on what he saw as bearing the most responsibility for the unrest, the racist capitalist system of the United States:

It is not enough for me to stand before you tonight and condemn riots. It would be morally irresponsible for me to do that without, at the same time, condemning the contingent, intolerable conditions that exist in our society. These conditions are the things that cause individuals to feel that they have no other alternative than to engage in violent rebellions to get attention. And I must say tonight that a riot is the language of the unheard.

Even more bizarrely, the piece went on to eliminate the core racial component of slavery from the equation:

For one of the greatest of his contributions to the nation was his elevation of the national dialogue on the subject that has haunted the country almost since its earliest days as a scattered bunch of settlements on these shores: the enslavement and exploitation of the weak by the strong.

“The weak by the strong”? Chattel slavery, as exercised in the United States, wasn’t an abstract struggle between “the weak” and “the strong,” it was the enslavement of Native Americans and then Africans by white settler colonists. It was the very foundation on which the country was built, and the system of white supremacy it advanced remains an axiom of our power structure. Somehow a 500-word piece remembering the legacy of MLK doesn’t use the words “white supremacy” or “racism” once. Instead, the reader is fed five quotes, stripped of all context, reducing the MLK legacy to wall calendar, “all lives matter” bromides:

Here are a handful of quotes the Post left out:

The list could go on for pages. To see rundowns of MLK quotes where he’s not being rebranded as a self-help hardback, check out these excellent articles by Kali Holloway (AlterNet, 12/16/15), Katie Halper (Raw Story, 1/11/17) and Heben Nigatu (Buzzfeed, 1/19/13).

It’s a predictable approach—removing MLK’s critiques of capitalism and US imperialism—from a reliable protector of capitalism (1/30/16, 11/1/16, 10/3/17) and US imperial aggression (2/6/03, 5/25/17, 6/26/17, 12/4/17), but rarely is sanitizing MLK done in such a haphazard and patronizing fashion. Not only is all blood taken from his words, but the quotes highlighted seem handpicked precisely to ameliorate the guilt of the Post’s more conservative white readers in the hackiest manner possible; a shoddy whitewash by a paper supposedly representing a majority African-American city.