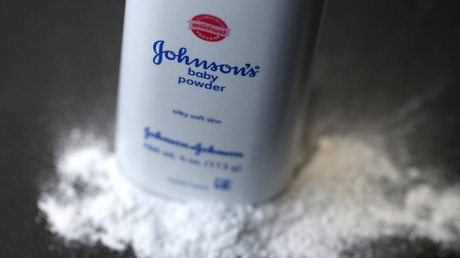 Johnson & Johnson knew “for decades” that their talcum baby powder contained asbestos and worked to conceal it from federal regulators and the public, an investigation by Reuters has found.

J&J stock plunged 8 percent to $136.10 after Reuters reported that the company knew about asbestos in its products since the 1970s. Its the biggest loss in 16 years.

The Reuters report says that J&J failed to inform the Food and Drug Administration (FDA) that at least three tests from three different labs carried out between 1972 and 1975 had found asbestos in the brand’s iconic baby powder product. In one case, the levels of asbestos were reported as “rather high.”

Also on rt.com
Officials’ fault or parents’ neglect? 7yo migrant child dies in custody after crossing US border


Even when the FDA was weighing limits on asbestos in cosmetic talc products in 1976, J&J assured the regulatory body that none had been detected “in any sample” between December 1972 and October 1973.

Reuters examined internal documents, as well as trial depositions and testimony which they say prove that J&J knew the powder was sometimes tainted with “carcinogenic asbestos” from “at least 1971 to the early 2000s” and that executives, mine managers, scientists, doctors and lawyers worried about the issue and how to address it while keeping it hidden from regulators and the public.

The Reuters report noted that most internal J&J asbestos tests did not find asbestos, but said that while the company’s testing methods had improved over time, they “have always had limitations that allow trace contaminants to go undetected” and that only a “tiny fraction” of the company’s talc is ever tested. The FDA’s own examinations also found no asbestos in powder samples in the 1970s, but Reuters says those tests did not use “the most sensitive detection methods.”


J&J vice president Ernie Knewitz told Reuters that plaintiffs’ attorneys are “out for personal financial gain” and are “distorting historical documents and intentionally creating confusion in the courtroom and in the media.” The company’s outside litigation counsel Peter Bicks dismissed positive tests for asbestos cited by Reuters as “outlier” results, but lab tests conducted by experts hired by plaintiffs have also shown asbestos in J&J’s products.

A note on a statement for the company’s website in 2013 acknowledged that it would be misleading to say that the talc-based products had “always” been asbestos free.

J&J’s “selective use” of test results influenced a decision made by a New Jersey judge earlier this year to rule against the company in a case claiming the products caused cancer. The judge said J&J had engaged in “misrepresentation by omission.”

J&J has dominated the talc market for more than 100 years and while talc products accounted for just $420 million of J&J’s $76.5 billion in revenue last year, Johnson’s Baby Powder is still considered, as one company email from 2003 put it, a “sacred cow” of its product line.