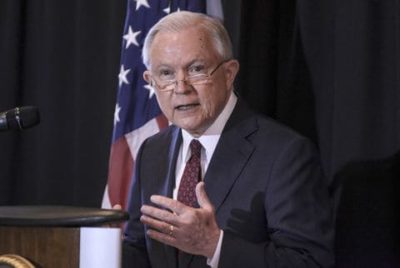 Attorney General Jeff Sessions is urging obedience to the law requiring the separation of families of undocumented immigrants, separating 11,000 children from their parents so far, 2000 in the last month, by citing scripture. Christian scripture, specifically. He cites a passage from St. Paul’s Epistle to the Romans in the New Testament, written probably in Corinth between 52 and 55 CE and addressed to “all that be in Rome, beloved of God, called to be saints.” Let’s look at that text in context, just for fun.

Paul writes of wanting to visit the imperial capital, and to eventually proceed to Spain to preach the gospel there. (There were Jewish synagogues in Spain, and Paul always initially preached in these establishments, where Gentiles were often welcomed and who could be won over to the Christian gospel as Paul understood it. This just shows how ambitious Paul was as a world-traveler, and how important his role was in spreading the emerging cult of Jesus centered in Judea throughout the eastern Mediterranean, establishing a world religion.)

Paul was, of course, originally Saul of Tarsus, a Jew from the port city of Tarsus in Cilicia, which is to say what is now southeastern Turkey. He was a tent maker and initially a fierce opponent of Christianity after its inception around Jerusalem circa 30 CE. He supposedly “persecuted” Christians in Judea and was on the road to Damascus intending to do more harm in Syria when he…