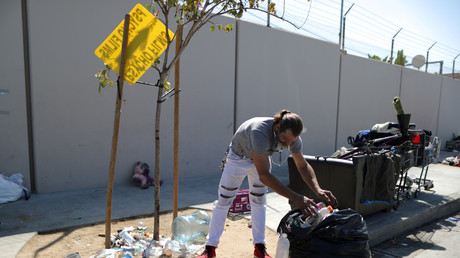 The Redacted Tonight team takes a look at the striking number of poor people – 40 million – living in the United States, despite the country having a reputation as being one of the wealthiest and most successful in the world.

“40 million continue to live in poverty. 40 million people! That’s almost like the population of France. That’s a lot. Or it’s like 7 Irelands!” said the show’s host, John F. O’Donnell.

The report says that, despite the US being among the world’s most powerful and technologically-advanced nations, its inequality level is higher than in most European states, and that Americans “live shorter and sicker lives compared to those living in all other rich democracies.” At the same time, the US is home to over 25 percent of the world’s 2,208 billionaires.

Alston warns that the plight of the poor will only worsen if the White House follows through on its plans to cut access to Medicaid, and scrap food stamps and housing subsidies.

“I heard how thousands of poor people get minor infraction notices which seem to be intentionally designed to quickly explode into unpayable debt, incarceration and the replenishment of municipal coffers,” O’Donnell said of the situation in the country. “Sadly, it’s incredibly expensive to be poor in America. Which, is like, the worst oxymoron I can think of.”

The high level of extreme poverty in rich countries like the US is a “political choice” of those in power, Alston writes to the UN, so had there been political will, it could already be eliminated. This prompted O’Donnell to pose the question: “So why aren’t we eliminating it? Where is the political will? More specifically – where’s all the money going? I’ll give you a hint. It rhymes with ‘irrational nonsense.’ Yep, you guessed it: national defense.”