Janine Jackson interviewed Tim Shorrock about the Korea Summit for the March 1, 2019, episode of CounterSpin. This is a lightly edited transcript. 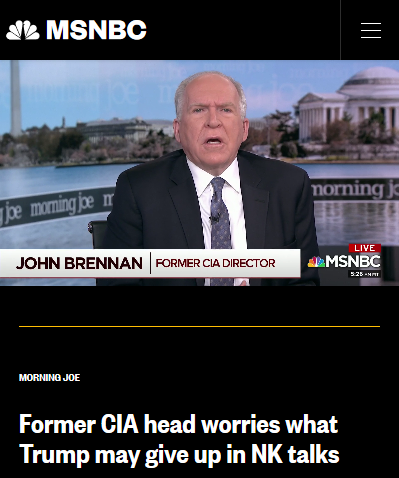 Janine Jackson: We’re told the summit between Trump and Kim Jong-un has ended with no agreement. That may be received as good news by, say, the former CIA chief of staff that MSNBC brought on to warn viewers that Trump’s “bromance” would lead him to “cave” on nuclear weapons. And to the think tank expert whose op-ed in the LA Times explained that the long sought-after recognition of the end of the Korean War might sound “innocuous,” but is actually dangerous, because it might lead to a real peace treaty on the peninsula, and “if South and North Korea were to enter into a formal of state of peace, what would be the rationale for keeping 28,000 US troops in South Korea?”

You can be forgiven for being unsure exactly what’s going on here, but we would hope that a baseline idea would be that arguments against peace should get serious scrutiny.

Joining us now to talk about the Hanoi Summit and Korea peace talks is journalist Tim Shorrock, author of Spies for Hire: The Secret World of Intelligence Outsourcing. He joins us by phone from Washington, DC. Welcome back to CounterSpin, Tim Shorrock.

JJ: The fear, as far as I could understand it, was that Trump in this summit was going to agree to loosen sanctions, or allow for a peace declaration on the peninsula, without North Korea agreeing to eliminate all of its nuclear weapons capacity first—or, as an expert source told USA Today, “We’ve said this over and over: If you choose to give up nuclear weapons, you can have a better life.’’

But then we also heard the idea that the de-escalation of tensions between North and South Korea would itself be bad, well, for somebody. I don’t know that the outcome of the Hanoi Summit is going to shake up media’s basic storyline. What are we seeing here? What’s going on?

TS: Basically, a complete inability to tell the story, see the story, through Korean eyes. Like, for example, last year, when Trump and Kim met in Singapore for the first-ever meeting between the US president and a North Korean leader, they agreed on a set of principles, which was, No. 1, establish a new relationship between US and North Korea; No. 2, that they would establish a peace process on the Korean Peninsula, and work with South Korea to deepen a peace process, and 3, that they would work toward the denuclearization of the Korean Peninsula.

And so, for a lot of the press, they just see that as—the first two elements of that aren’t even considered. 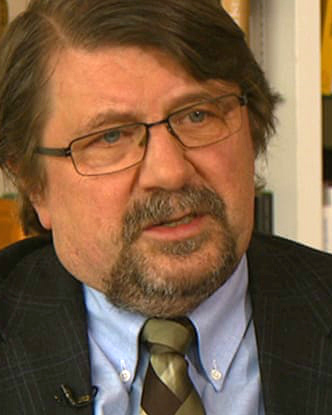 Tim Shorrock: “The fact that the two leaders are meeting and trying to work out a peace is just seen as a negative, and even almost a crime.” (image: Al Jazeera)

I mean, it’s a form of propaganda. So, yes, he’s a dictator, but actually, no, people are not starving anymore, but that doesn’t seem to matter. But they just say this over and over again to denigrate the whole idea of meeting someone like that. And the fact that the two leaders are meeting and trying to work out a peace is just seen as a negative, and even almost a crime.

Here’s what’s ironic about it is, her father, Zbigniew Brzezinski, was the national security advisor to Jimmy Carter when he was president in 1980, when there was a murderous dictator in South Korea who, when there was a rebellion against the military government of South Korea, the US under Carter helped put that rebellion down.

They decided to side with the military, one day after this murderous dictator had killed hundreds of people in a southern city in Korea. And Brzezinski, her father, was directly involved in that. He’s the guy that really set the policy. So apparently she doesn’t even know the history of her own family. But it’s just an unbelievable hypocrisy.

JJ:  I think it has to seem a little bit funny to people, just coming to it earnestly, reading these articles that the United States gets to decide when tensions end between North and South Korea? That the Pentagon gets to nix, you know, improved railways between the North and the South?

And you sort of get the feeling from coverage that South Korea really can’t be trusted with their own interests, which I guess they’re meant to say are our interests. It’s confusing, genuinely, if you are not a cynical person, to understand where someone who believes in peace and a de-escalation of tensions should find themselves in all of this. 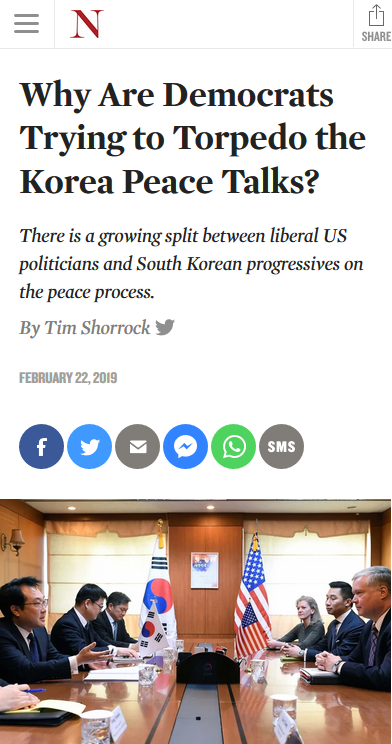 TS: Right, it is; it’s terribly confusing for people. The attitude toward North Korea is one thing, and then the attitude towards South Korea—among the mainstream media is, it basically doesn’t exist as a country. It’s like a colony. They’re supposed to just do whatever we say.

And a lot of times articles are written and reports are made that, yeah, like you said, don’t trust the South Koreans, they’re “moving too fast, and making peace with the North.” I mean, this is their own country. This is a war that ripped apart their country. You know, 4 million Koreans at a minimum died.  Maybe 35-, 36,000 American soldiers, and soldiers from other countries as well. But it was a terrible, terrible war.

JJ:  There’s an extra muddling to the picture because, for some media, the problem seemed to be, if Donald Trump gets any kind of a deal, we’ll never hear the end of it. And he’ll ask himself to get the Nobel Peace Prize, and then all our heads will explode. Hatred of Donald Trump is not a legitimate reason to oppose a negotiation.

And I just want to ask you, finally, what do people interested in peace, what should we be looking for in terms of the media coverage coming out of this summit?

TS: I think we should look to see if it continues the same. What we’ve been seeing over the last few months is a stream of reports based on think tanks like the Center for Strategic and International Studies, which is funded by the military industrial complex, and some governments, like the US and Japan. But, again, a lot of money from defense contractors that assert that North Korea has continued to build its nuclear weapons and missiles while these talks have been going on. And, first of all, there’s a fallacy behind the reports in general, because there is no agreement yet. 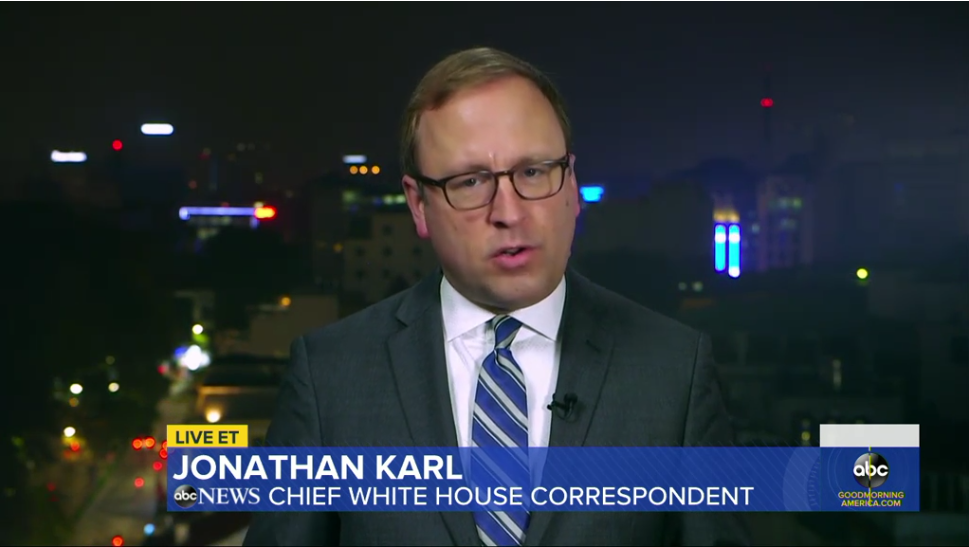 TS: I mean, the United States hasn’t stopped deploying its nuclear weapons aimed at North Korea, that are stationed on ships and planes in the Pacific, in Japan and Guam. Yes, the hatred of Trump, and the desire to nail him and get him, is so clear in the reports. Last night, watching this live press conference from Hanoi, a few US reporters got called on in the beginning, but then he’s going to take some questions from South Korean and Chinese reporters, and a couple of British reporters, who are all interested in what had happened, and how the talks had apparently failed. The fourth question was from Jonathan Karl of ABC News; he immediately asked him about the testimony from the lawyer.

TS:  Michael Cohen, right. And then after the press conference, when these network people do these stand-ups, right? They’re all complaining that Trump had not gotten questions from the White House press, instead had gone to the foreign press… because they all wanted to ask about Cohen!

They’re so wrapped up in this, it’s as if Korea as a country just doesn’t exist to them. The White House press corps by and large is not even providing the information Americans need to understand what’s going on.

JJ: Well, I’m going to end it there, and thank you very much.

We’ve been speaking with journalist Tim Shorrock. You can still find his piece, “Why Are Democrats Trying to Torpedo the Korea Peace Talks?,” and other related work, online at TheNation.com. Tim Shorrock,  thank you so much for joining us this week on CounterSpin.