On its July 6, 2018, episode, CounterSpin reaired Janine Jackson’s interview with Mara Verheyden-Hilliard about the right to protest, originally heard on the July 14, 2017, broadcast. This is a lightly edited transcript.

Janine Jackson: A Washington Post poll from July 2017 found that one out of every three Washington, DC, residents said they’d taken part in a protest against Donald Trump since his inauguration. That number included half of the district’s white residents, half of people making more than $100,000 a year, and a fifth of the respondents over the age of 65.

As more and more people go out in the street, states are rushing to criminalize that resistance. This time last year, we talked about the right to protest and the role of law in a time of widespread dissent with activist attorney Mara Verheyden-Hilliard, executive of director of the Partnership for Civil Justice Fund. I started by asking about the J20, the group of people—including journalists—arrested for protesting at Trump’s January 20 inauguration. CounterSpin listeners got an update on the state of that case just a few weeks back on the show. Mara Verheyden-Hilliard explained the nature of the J20 case. 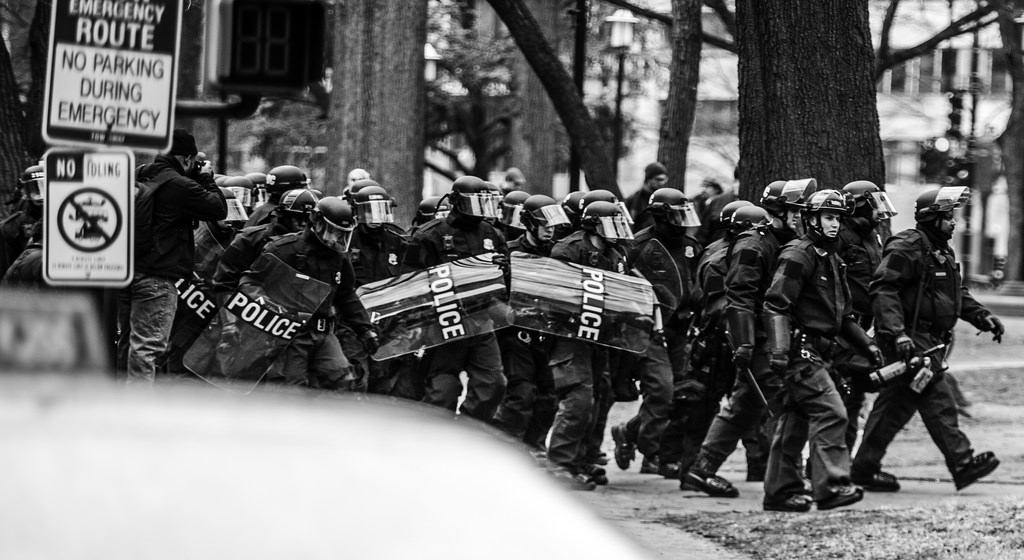 Mara Verheyden-Hilliard: This case is really of extraordinary proportions, when you look at what the government is doing to people who are engaged in protests on the first day that Trump took office. And it’s really in its own context significant, too, because of the major shift in policing in Washington, DC, which we believe is intended to send a signal.

What’s happened now is more than 200 people were swept up in a dragnet arrest by the police, and this occurred after the police had followed the demonstration for, by their own account, approximately half an hour, while there were some people who broke windows, only a handful of people. And rather than going in and arresting the people for whom they had probable cause to arrest, the police waited that arbitrary time, tracked and detained 200 people. And so they swept up demonstrators, passers-by, journalists, anyone who’s in proximity, anyone who is chanting and protesting.

And then they undertook this mass prosecution with the United States Attorney’s Office here in the District of Columbia, in which people are being threatened with, as you’ve mentioned, jail time that is decades and decades long, really a lifetime of jail time, with these felony charges. They are charging people en masse with crimes that may have happened, in terms of property damage, but charging everyone with crimes without particularized probable cause, without being able to point to a person and say, you committed this act and so we’re charging you for this act. They’re charging everyone in the vicinity for being in proximity.

This is extremely dangerous; it sets the stage that for any demonstration, if anyone commits a criminal act, an act of property damage, whether that be a protester or, frankly, a police agent provocateur, the police can now use this as license, or they wish to, to sweep up everyone else around them.

JJ: This is what we talked about before. It’s not a crime, now, is it, to be in proximity to other people who break the law in conjunction with First Amendment activities?

MVH: Of course it’s not, and it cannot be. And the First Amendment has always stood for that, in fact, you cannot criminalize a person for the acts of another. And particularly in the context of the First Amendment, when it’s an issue where the connection is that there may be a sympathy of political views, one cannot do that. There are cases dating back, NAACP v. Claiborne Hardware and others, the courts said you have to act with precision. You cannot say that just because people have a similar point of view, or may have similar political goals, that those who carry out illegal acts or acts of violence in pursuit of those goals, that those acts can be attributed to the others who do not.

JJ: Right. These charges, at the level they’re at, it feels new, but we know that the effort to repress First Amendment expression is not new. The Supreme Court last month rejected a First Amendment case that dates from years back, Garcia v. Bloomberg. Can you tell us about that and how it relates?

MVH: The Garcia v. Bloomberg case comes from the Occupy demonstration of 2011, when 700 people were peacefully marching, compliant with police orders, there was no violence, and as people marched, the police escorted the march. The police themselves closed the Brooklyn Bridge roadway to vehicular traffic. The police and police commanders themselves opened up the roadway to pedestrian traffic. It is the police and police commanders who led the demonstrators onto the roadway of the Brooklyn Bridge, and once those demonstrators had flowed and followed behind the lead of the police, the police stopped the march, trapped them from behind, mass-arrested 700 people.

When we litigated this case, we won at the District Court level, we won at the Second Circuit, in fact. And then Mayor de Blasio, who had taken office, frankly, running on an Occupy ticket, had the court reevaluate the ruling, and the court, in an extraordinary measure, reversed itself. And we took this case up to the Supreme Court, and the Supreme Court just last month determined that they would not hear it.

JJ: Obviously, lots of folks are taking their lead from this, and kind of joining on this bandwagon. We have a spate of anti-protest legislation around the country, even UN experts are issuing alarmed statements now. Some 20 states have passed or tried to pass laws allowing protesters to be charged with conspiracy, increasing penalties for blocking streets, even protecting drivers who run protesters over, banning masks and hoodies…. I mean, is anyone really confused that the intent of these rules is to quash dissent, and doesn’t that thinly veiled intent matter? 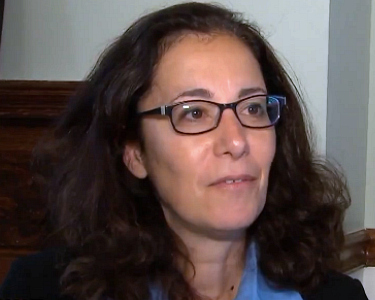 Mara Verheyden-Hilliard: “There is an effort around the country…to curtail people’s fundamental First Amendment rights to gather together in the streets.” (image: WTTG)

MVH: It’s clear that there is an effort around the country to try, through legal means—although we would consider illegal means—to curtail people’s fundamental First Amendment rights to gather together in the streets, to be able to speak out in unified action.

I do think, as much as we’re seeing these kinds of restrictions imposed and these rulings, that at the same time it can obviously have a chilling effect on people, the reality is that people do always come out and people will continue to come out. And while this may be intended to have a chilling effect, it is really crucial that people stand up and speak out for what they believe in. And I do think the reason that we’re seeing these is because there is a growing recognition that there really is this fire of people, these embers burning, where we keep seeing people come up and demonstrating for what they believe in. We’re seeing so many more people entering political life, even since the election of Donald Trump. People are taking to the streets, protesting, who never protested before.

So while we’re faced with what is I think overt repression, both in terms of these felony prosecutions, these state laws, these court rulings, we also are faced with the fact that there are millions of people who are engaging in political protest and political organizing who have never done so before, and that’s a force that really can’t be stopped.

MVH: Thank you for having me.