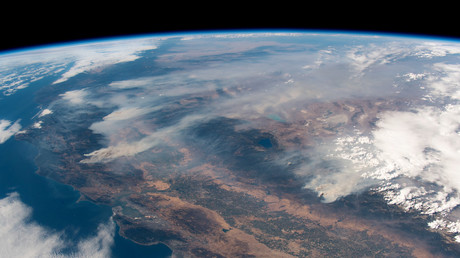 Bombing raids carried out by Allied forces in Europe during WWII were so powerful that they were detected at the edge of space and actually heated up the Earth’s upper atmosphere.

Researchers at the University of Reading studied atmospheric response records during the time of 152 Allied bombing raids between 1943 and 1945, using data collected by the Radio Research Centre in Slough, UK. Their findings were published in Annales Geophysicae this week.

“The images of neighborhoods across Europe reduced to rubble due to wartime air raids are a lasting reminder of the destruction that can be caused by man-made explosions. But the impact of these bombs way up in the Earth’s atmosphere has never been realised until now,”said Chris Scott, Professor of Space and Atmospheric Physics.

The bombing raids sent shockwaves to the edge of space and actually managed to heat, and thus weaken, the electrified upper atmosphere (otherwise known as the ionosphere) roughly 1,000km (621 miles) above ground-level.

“It is astonishing to see how the ripples caused by man-made explosions can affect the edge of space,” Scott added. “Each raid released the energy of at least 300 lightning strikes. The sheer power involved has allowed us to quantify how events on the Earth’s surface can also affect the ionosphere.”

The ionosphere can affect technology in various ways but most notable impacts include shortwave radio, GPS systems, radar telescopes and radar detection systems. The study’s findings will help further humanity’s understanding of powerful natural forces such as lightning, volcanic eruptions and earthquakes, and how exactly they impact the upper atmosphere.

“Aircrew involved in the raids reported having their aircraft damaged by the bomb shockwaves, despite being above the recommended height,” study co-author Professor Patrick Major, University of Reading historian said.

“The unprecedented power of these attacks has proved useful for scientists to gauge the impact such events can have hundreds of kilometers above the Earth, in addition to the devastation they caused on the ground.”

The researchers are looking to expand the data set and have asked for the public’s assistance in digitizing additional atmospheric records from the World War 2 era.