What use is having a “liberal” cable network if it remains silent on the major issues facing the left?

As FAIR noted in January (FAIR.org, 1/8/17), MSNBC’s coverage of the US-assisted bombing and siege of Yemen is virtually nonexistent. In the year 2017, MSNBC ran only one segment that focused on the US’s role in Yemen; zero in the second half of the year. In 2018 so far, MSNBC hasn’t run a single segment on Yemen, much less the US’s role in in it.

The US-supported, Saudi-led bombing campaign has caused upward of 1 million cholera cases and killed over 10,000 civilians (a figure that is over a year old, with the current toll likely much higher). The only segment this year that even mentioned Yemen, according to a search of MSNBC transcripts in the Nexis news database, was a Chris Hayes interview (All In, 3/2/18) with Ryan Grim of The Intercept, in which Grim described the impact of Jared Kushner’s secret dealings with Qatar:

The Yemen crisis and the humanitarian disaster going on there is tied into this, because it’s kind of the way the politics play out there. Saudi cares more about the Yemen war and the UAE cares more about Qatar, and so there’s sort of a quid pro quo going there, like Saudi will help UAE going after Qatar, the UAE helps Saudi go after Yemen. So facilitating this entire thing has helped, you know, explode a cholera epidemic and mass starvation in Yemen while we’re at it.

Viewers who rely on MSNBC for their news were likely at a loss to say what Grim was talking about. 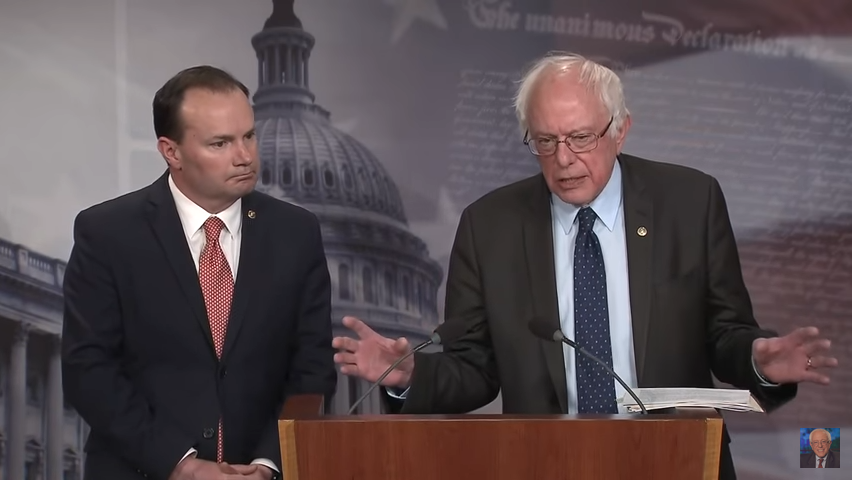 In the run-up to a vote this week on a bill co-sponsored by senators Bernie Sanders, Mike Lee and Chris Murphy to withdraw US support for the Saudi air campaign—a move that, according to at least one insider, would end the war itself—the US’s major “liberal” cable network has continued its radio silence. MSNBC continued to ignore the story this week as activists and a broad coalition of anti-war groups tried to put pressure on the Senate to finally end the US-sustained siege of Yemen.

MSNBC’s three major stars—Hayes, Rachel Maddow and Lawrence O’Donnell—haven’t used their sizable social media followings to highlight the issue either. None of the well-paid pundits has tweeted about the topic of Yemen in 2018. While Hayes has handwrung about the topic on Twitter in the past, he hasn’t covered it on his show since summer 2016. O’Donnell has tweeted about Yemen once in 20,000 tweets since joining the social media platform in June 2010; Maddow has mentioned it in four out of 7,000 tweets, two of those mentions in 2010.

Even as frequent MSNBC guests Bernie Sanders and Chris Murphy, as well as celebrities like Mark Ruffalo and Susan Sarandon, lobby directly for the bill, MSNBC has not dedicated a single segment to the war, or to the recent high-profile efforts to end it.

MSNBC ceding anti-war sentiment is notable in its own right, and as part of a broader trend of liberal institutions abandoning anti-war voices in favor of short-term liberal jingoism (FAIR.org, 8/24/16). Despite not having a single segment on Yemen thus far in 2018, MSNBC did manage 143 segments on Stormy Daniels, the woman President Trump paid off and harassed to hide an affair. A story to be sure, but perhaps not one worth 143 more reports than thousands being bombed with the help of US weapons sales and military support.

It’s extra disconcerting that MSNBC is being outflanked from the left by Breitbart, which has covered efforts to end the war a dozen or so times—likely for cynical, nativist reasons. But anti-war sentiment is going to be led by someone, and one imagines that those concerned with building progressive anti-war coalitions would prefer it be led by a liberal network rather than a fascist one.