Citing dangers to US military dominance, the Pentagon’s top civilian and military officials pleaded with Congress to give them almost $600 billion in funding for 2017. Russia and China topped the list of challenges, with ISIS bringing up the rear.

Testifying before the defense subcommittee of the Senate Appropriations Committee on Wednesday, Defense Secretary Ash Carter and Chairman of the Joint Chiefs of Staff General Joseph Dunford made the case for a budget of $582.7 billion for the 2017 fiscal year, including the Overseas Contingency Operations (OCO) fund.

In the Asia-Pacific, “China is rising, which is fine, but behaving aggressively, which is not,” Carter said, citing Beijing’s land reclamation efforts in the South China Sea. “China is investing in capabilities to counter third-party – including the United States – intervention during a crisis or conflict,” Carter added.

Money-wise, fighting Islamic State (IS, formerly ISIS/ISIL) terrorists in Iraq and Syria remains one of the Pentagon’s priorities, with the requested budget for Operation Inherent Resolve doubling to $7.5 billion in 2017. However, Carter requested only $250 million for “enabling Syrian anti-ISIL forces” – down from $600 million requested for 2016 for a program that lawmakers have described as a “total failure.”

On the other hand, the budget requested for beefing up US presence in Europe has been more than quadrupled to $3.4 billion. Carter said this was necessary to reassure NATO allies in face of what he called “Russian aggression” in Ukraine, Georgia and Moldova.

The Pentagon wants to quadruple the budget to protect European allies from #Russia. That is $3.5 billion for 2017.

“We have a lot of concerns about Russia,” Carter said, citing Moscow’s alleged expertise in “hybrid warfare.”

Rather than giving the Russian aerospace forces credit for helping the Syrian government defeat IS in Aleppo and Palmyra, Carter accused Moscow of “pouring gasoline on a civil war, fueling the very extremism Russia claims to oppose.” 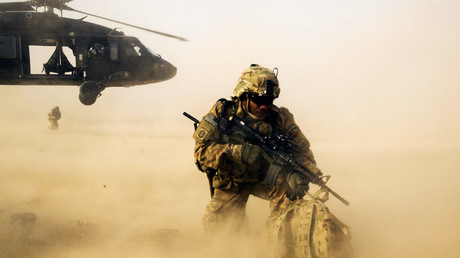 General Dunford gave Russia credit for “increasingly sophisticated military capabilities and doctrine,” and called it a “peer competitor” to the US in cyberspace. It was his explanation of the US military’s mission that put the fear of Russia – and China – into context, however.

The US armed forces “must be capable of simultaneously defending the homeland while waging a global counterterrorism campaign, deterring potential aggressors, and assuring allies,” Dunford told lawmakers, while possessing such overwhelming capabilities that US troops are never sent into a fair fight.

Billions and billions of dollars will be required to fulfill that tall order. However, unless Congress can head off the spending cuts mandated by the sequestration policy, the Pentagon might face $100 billion in cuts between 2018 and 2021, “which would introduce unacceptable risks,” Carter warned.

Carter also took a jab at the House Armed Services Committee’s markup of the defense budget, which seeks to divert about $18 billion from the warfighting OCO fund “and spend that money on programmatic items we didn’t request.”