The last few weeks have brought a devastating slew of headlines on an increasingly cruel immigration enforcement practice: forcibly separating migrant children from their parents.

As a parent myself, the image of kids crying out for their parents while being hauled away is almost too much to bear. But even worse is the knowledge that it’s part of an intentional administration strategy to deter immigrants by threatening to kidnap their kids — a practice that recently drew UN condemnation.

This week in OtherWords, I write about the rapid expansion of this deeply disturbing practice. Cartoonist Khalil Bendib makes a biblical allegory of it. And Lizet Ocampo pushes back against the parallel attacks on so-called “sanctuary cities,” which research shows actually have less crime than non-sanctuary jurisdictions.

Meanwhile, as graduation season comes to an end, Josh Hoxie reports on an inspiring campaign to bring free higher education back to America’s largest state (and maybe yours, too). And as Pride Month kicks off, Jill Richardson reflects on how so-called “pro-family” anti-LGBTQIA bias actually divides families.

Also this week, fast food worker Tanya Harrell shares her story of workplace harassment, which she and other women are working to end in their industry. And in an analogy our small-handed president would surely understand, Jim Hightower unfavorably compares Donald Trump’s “limp twig” to Teddy Roosevelt’s famed “big stick.” 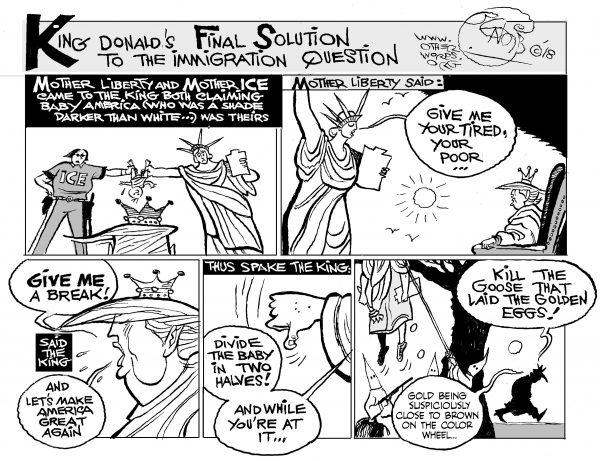