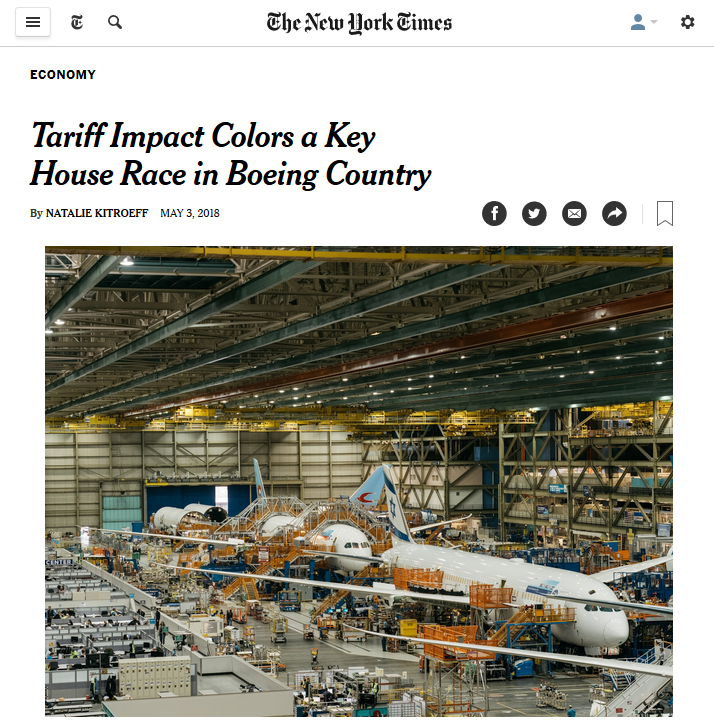 Many folks in the media seem to think it is part of their job to promote trade agreements like the Trans-Pacific Partnership (TPP)—not only in opinion pages, but in the news section, too. The New York Times (5/3/18) gave us yet another example of this effort in a piece on a hotly contested congressional race in Washington.

At one point, the piece tells readers that the TPP “would have reinforced the nation’s embrace of free trade.” This is not true.

The TPP had relatively little to do with free trade, in the sense of reducing tariffs and other traditional trade barriers. The United States already had trade agreements with six of the other eleven countries in the pact, and trade barriers were already low with most of the other countries.

The main focus of the agreement was locking in commercial rules on items like internet commerce. These rules would make it more difficult for countries to restrict privacy abuses, like those recently committed by Facebook.

The TPP also would have imposed longer and stronger patent and copyright protections. These protections are forms of protectionism, as in the opposite of free trade.

They are also incredibly costly forms of protectionism, often raising the price of protected items (like prescription drugs) by factors of ten or even a hundred. This makes them equivalent to tariffs of 1,000 percent or 10,000 percent. The cost in the case of prescription drugs alone is in the neighborhood of $380 billion a year, roughly 2.0 percent of GDP. The New York Times may like longer and stronger patent and copyright protections, but it is dishonest to call them free trade.

The piece also reported without comment a grossly inaccurate number, on the benefits of the tax cut, claimed by Dino Rossi, the likely Republican nominee for the Washington House seat. Rossi is quoted as saying the typical household will get $3,357 from the tax cut. According to the Tax Policy Center, a family in the middle of the income distribution can expect to get $930 from the tax cut, less than one-third of Mr. Rossi’s figure.

Dean Baker is a senior economist at the Center for Economic and Policy Research in Washington, DC. A version of this post originally appeared on CEPR’s blog Beat the Press (5/4/18).