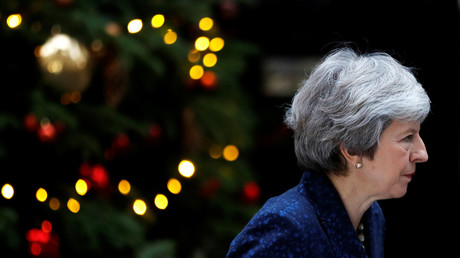 UK Prime Minister Theresa May has told Tory MPs that she will stand down before the next general election, in a bid to win their support ahead of a no-confidence vote later this evening.

Entering a meeting with Conservative MPs in a Westminster committee room ahead of the crucial vote, May was met with applause and the traditional banging of desks from some sections of her party.

From inside the room: May says “in her heart she would like to fight election, but recognises that the party does not want her to so it is not her intention to. Won’t when asked give a date”

Told the PM said to MPs at the 1922 committee, “in my heart, I would like to lead the party into the next general election” – but she accepts that is not the will of her colleagues.

May has told the 22 she won’t fight the next election. Ministers crying in the room

A reportedly emotional May accepted that she was too unpopular to fight another general election campaign, set for 2022.

“It’s not my intention to lead the party into the 2022 election,” the beleaguered May said, according to the BBC.

Brexiteer and key figure in the plot to oust May, Jacob Rees-Mogg wasn’t so keen on her speech. Stating that May only received a “half-hearted” reception, commenting that ‘intention’ was a “politician’s word.”

The Prime Minister allegedly did not rule out leading the Tories in a snap election, which many commentators have speculated could be called amid the Brexit chaos. May significantly weakened her grip on power when she lost the Conservatives’ majority in the 2017 snap-General Election.

This is getting slightly ridiculous. Another Tory MP says @theresa_may committed only to going before 2022 if election then – but would not rule out leading party into a possible “snap” election in coming year! “We’ve got her for another three years!” was the heartfelt cry

Following her announcement, May received numerous expressions of support from some Tory MPs.

In #1922Committee told PM, that despite my differences with her over the #EUDeal, I would be supporting her in the vote this evening, and asked her to pledge that social justice would be number one priority for Government once Brexit sorted. PM made that pledge. https://t.co/fMZQWSRqua

The secret ballot is being held on Wednesday evening and May needs a majority, 158 of the 315 Conservative MPs, to remain leader.

READ MORE: May gets 158+ pledges of support, but it could not matter as MPs may be ‘lying’

Running tallies, based on statements that MPs had made either on social media or to journalists, indicated that May is on course to win the vote.

Should she lose a leadership contest would triggered further complicate the already intricate Brexit process.

May is considered a 1/9 favorite to win by the bookies. While another set of gamblers have backed May; the FTSE 100 rallying and Pound Sterling rising against the dollar, after respective recent poor performances.