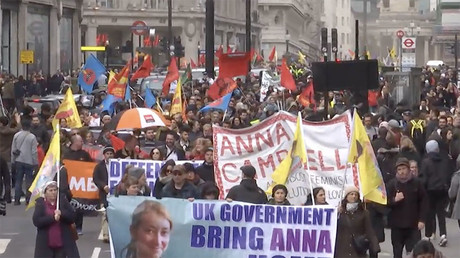 Hundreds of people have marched in Central London to demand that the UK ceases its support for Turkey’s military campaign against the Kurds in Afrin, Syria.

Pro-Afrin supporters have hit out at the UK government for backing Turkey despite the country having a track record of human rights abuses. They condemned Prime Minister Theresa May for overseeing the sale of millions of pounds worth of arms to Ankara, as it seeks to clear the northwest Syrian region of its Kurdish community.

One demonstrator told RT: “The West and particularly EU countries certainly have a debt and definitely a moral debt to the Kurds, who have fought and defeated ISIS in Syria and the Middle East so any support, declaration of support is necessary and needed.”

She went on to say that, on the contrary, “they [the UK] are still selling arms to the Turkish government and Turkish state and despite having an incredible human rights abuse and violation record, only a few months ago, Theresa May signed an £100 million ($140.4 million) fighter-jet deal with [Turkish President] Erdogan.”

It follows delays and disruptions at major railway stations in London and Manchester after pro-Kurdish demonstrators stormed the stations and climbed on the tracks last month. It forced police to close down King’s Cross and Manchester Piccadilly stations.

Up to 140 civilians are believed to have been killed by Turkey’s ‘Olive Branch’ operation since it began on January 20, according to the UK-based Syrian Observatory for Human Rights. Turkey claims that the group in charge of Afrin, the People’s Protection Units (YPG), the armed wing of the Democratic Federation of Northern Syria (Rojava), is a “terrorist” extension of the Kurdistan Workers’ Party (PKK), which has battled the Turkish state for three-decades.