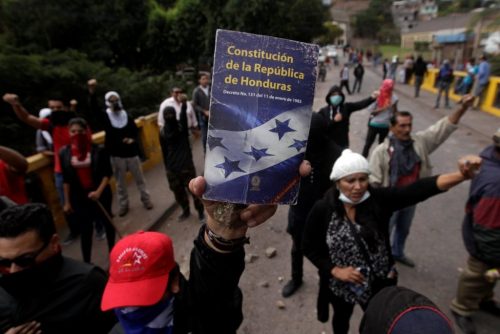 For over two months, the Opposition Alliance has claimed that their candidate, Salvador Nasralla, was the winner of the presidential elections of November 26. Gilberto Ríos Grillo is a national leader from the LIBRE party, one of the parties that makes up the Alliance, whose secretary-general is Manuel Zelaya, the former Honduran president who was deposed in a coup in July 2009. After the announcement of further mobilisations from the Honduran society to protest against the government, Ríos Grillo tells us about the recent developments in this social and political crisis that has already generated 34 casualties. He also stresses the international dimension to this crisis that Honduras is currently facing.

Alex Anfruns: In late December we saw these controversial statements from the US State Department, legitimising the fraud that had taken place in your country. How do you evaluate the situation from an international perspective?

Gilberto Ríos Grillo: In general, the international situation we are witnessing is of struggle. Even though Honduras is a small country, it is quite important to the United States. So in this fight for hegemony Honduras is not allowed to join the struggle.

After the almost total loss of legitimacy by the Honduran institutions, especially after the 2009 coup, the 2013 fraud and the most recent fraud which is even more blatant than the previous one, the “seal” of approval for the elections came from the US Embassy itself…