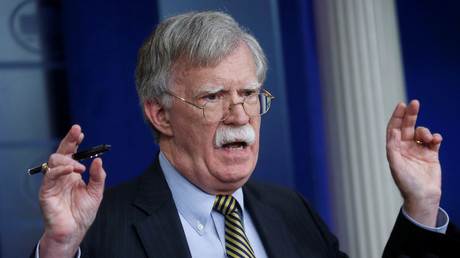 US National security adviser and uber-hawk John Bolton defended his and President Trump’s refusal to listen to a recording of the murder of Jamal Khashoggi, implying the journalist’s death throes would get lost in translation.

When pressed by a reporter who insisted that surely the man’s dying agonies could be understood by any human being regardless of their nationality, Bolton was dismissive. “I’m very satisfied that we know what the tape picked up, and it’s factored in the president’s position.”

That the veteran war hawk should shy away from a gruesome recording of the Saudi reporter’s dying moments is surprising, given that it’s his main duty to advise the US President on national security issues, which can get messy. But Bolton, like the president, cherishes the US’s special relationship with the Saudis, who last year signed a 10-year, multibillion-dollar arms deal – an agreement that has recently come under scrutiny for including “aspirational” arms sales.

Also on rt.com
Killers cut Khashoggi apart in 7 MINUTES while listening to MUSIC and LIKED IT – Turkish FM


The recording is reportedly brief, with Khashoggi’s dying agonies partially masked by music, and the Turkish press has not hesitated to publish the gory details, condemning Trump’s continued support of the Saudi regime.

Trump’s refusal to listen to Khashoggi’s dying moments makes slightly more sense – he has maintained the possibility Crown Prince Mohammed bin Salman’s innocence, stating that “we may never know all of the facts surrounding the murder of Mr. Jamal Khashoggi” and doing his utmost to avoid knowing all of those facts. He has been criticized by American and Turkish politicians alike, and the Senate Foreign Relations Committee even put aside its usual partisan bickering to implore Trump to investigate the Saudi prince.

Also on rt.com
Life in fear: Report says 1 in 3 US drone-strike deaths in Yemen are civilians, including children


CIA Director Gina Haspel had no such qualms, flying to Istanbul last month to participate in the investigation. The CIA has since concluded with high confidence that MBS ordered Khashoggi’s assassination. Trump, defending his non-stance, claimed the CIA’s assessment did not actually “conclude” that MBS had ordered the murder, but merely had “feelings” for it.