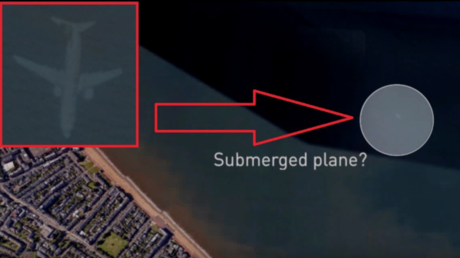 One keen-eyed Google Earth user was floored to discover an ‘underwater plane’ off the British coast via the satellite imagery service, in what at first glance appears to be an intact submersion of a big airliner.

Robert Morton, 55, discovered what looked to be the wreckage of a plane entirely underwater while sleuthing the surrounds of the Scottish city of Edinburgh using the open-access satellite imagery service.

“It looks like it is underwater,” Morton told The Mirror.

The sub-aquatic airliner appears on Google Earth just seven miles off the Scottish coast and nine miles from the nearest airport, sparking Morton’s curiosity even further.

“I have never heard of any aircraft crashing leaving Edinburgh or that area,” Morton, from Doncaster, South Yorkshire said. Upon closer inspection, however, Morton had a breakthrough: perhaps it was just a digital trick of the eye.

“I know the picture of the plane isn’t really in the water, it’s probably the satellite looking down on it through thin cloud giving it that appearance.”

The world has been captivated by aircraft mysteries since the 1937 disappearance of Amelia Earhart. Theories abound regarding the mysterious Bermuda Triangle and amateur detectives are still using Google Earth to try and track down the missing Malaysia Airlines flight MH370 to this day.