Leading Brexiteers Jacob Rees-Mogg and David Davis swore loyalty to Theresa May, with Rees-Mogg even hailing her “enormous virtues,” amid reports they attended a meeting in which ousting the PM was openly discussed.

A press conference of the hardline Brexit faction, the European Research Group (ERG), was overshadowed by reports that some 50 Tory MPs – members of the ERG – discussed how and when they could force May to stand down. 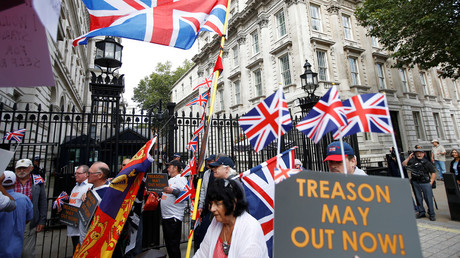 Rees-Mogg, who chairs the ERG, and former Brexit Secretary David Davis, who walked out of the government over May’s soft-Brexit, Chequers deal, gave the PM their support.

“I have long said, and repeated again and again, that I think the policy needs to be changed but I’m supporting the person,” said Rees-Mogg, adding: “Theresa May has enormous virtues. She is a fantastically dutiful prime minister and she has my support. I just want her to change one item of policy.”

In turn, Davis meanwhile stated that he has made it clear he thinks May is “a very good Prime Minister”.

“Like Jacob, I disagree with her on one issue, and it’s this issue,” he said, in reference to her proposed deal with the EU.

“And she should stay in place because we need stability and we need decent government as the backdrop to what we’re doing in the accompanying six months.”

Their backing of May, comes after representatives from the ERG discussed “how best you game the leadership election rules,” a source said as cited by the BBC. While another reportedly said: “If she won’t chuck Chequers then I’m afraid the party will chuck her.”

The plotting allegations drew the attention away from their purpose of the meeting, a set of ERG proposals on the position paper on the post-Brexit future of the Irish border. The panel, which included the ex-First Minister of Northern Ireland Lord Trimble, accused May of failing to challenge the EU on the Irish border, allowing it to become “a decisive factor” in the negotiations.

Journalists were repeatedly rebutted as they attempted to draw the panel on their position on May. The ERG members, unmoved, displayed their loyalty to the prime minister. For now.