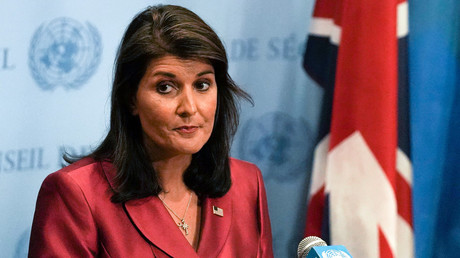 World leaders laughed at US President Donald Trump’s speech at the UN General Assembly because they respect him and appreciate his honesty, US envoy to the UN Nikki Haley argued. Trump’s critics were not convinced.

Appearing Wednesday morning on Fox & Friends, Haley argued that Trump is “very good at knowing his audience” and speaking directly to them.

“I deal with these leaders every single day, I know exactly how they think. Do they love America? No. Do they respect America? Now they do. When he said that, they love how honest he is, and it’s not diplomatic, and they find it funny,” she said.

Haley accused the media of spinning the moment to make it “something disrespectful” of Trump, while in actuality the world leaders fawned over the US leader.

“All day yesterday, they were falling over themselves to get a picture with him, to talk about how great his speech was, how strong it was,” she said. “They love that he’s honest with them and they’ve never seen anything like it, so there’s a respect there.”

You’d have to be an idiot to believe the Nikki Haley’s ridiculous spin. If you listen to the laughter it comes in a wave. English speakers laugh first, followed by those who then had Trump’s narcissistic lying braggadocio translated

No @nikkihaley It was not. You can’t spin this. They were laughing AT Trump. It was clear to everyone.

The world laughs at America because of Trump. Haley knows that.

Then why did @FoxNews see fit to edit out all that “respect”?
Not buying Nikki Haley’s damage control.

“That is not what diplomats told me,” a CBS reporter quipped.

The article she linked did not illuminate that. Instead, it says unnamed diplomats at the UN said that “they have learned that meeting with Mr. Trump one on one is more useful than listening to his speech and immediately issuing an emotional reaction.” Such as laughing, presumably.

Trump himself was of two minds about the incident. “Didn’t expect that reaction, but that’s OK,” he said smiling as the UN audience reacted to his claim about his administration’s accomplishments.