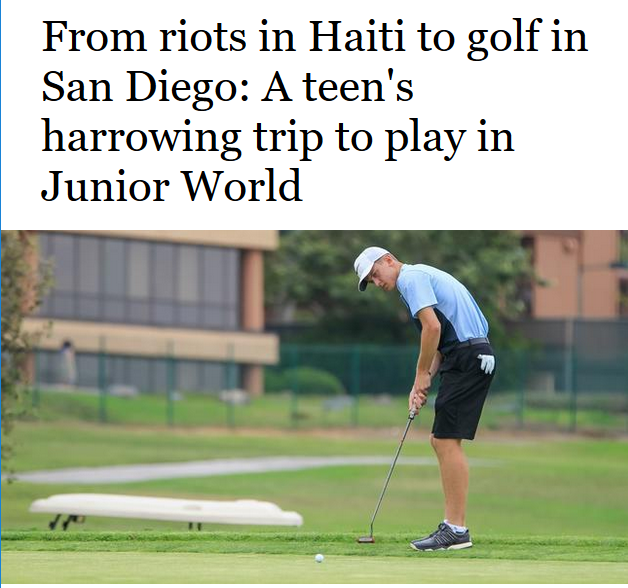 The San Diego Union-Tribune (7/10/18) reported the Haitian uprising as an incident in a young white American golfer’s life.

Those were the catchphrases in much of the US media coverage of the sometimes violent response to the government’s plans to remove subsidies for gas, kerosene and diesel in order to qualify for a $300 million loan from the International Monetary Fund earlier this month. (Seven people were allegedly killed, dozens of businesses were ransacked in the capital and other cities and the prime minister was forced to resign.)

If those descriptions hearken back to the “rioting and looting” in Ferguson (BBC, 11/25/14), and the “thugs” in a “frenzied rampage” (Independent, 4/28/18) in a Baltimore “engulfed in flames” (CNN, 4/28/18), audiences should not be surprised. When people of color take to the streets, corporate media often veer toward certain framing and vocabulary, as Brave New Films pointed out in an excellent compilation video a few years back.

In his 1992 book Haiti’s Bad Press, anthropologist Robert Lawless documented similar trends in a century’s worth of racist and reductionist writings about the country, covered by the foreign media, he noted, “only in cases of coups, calamities, communism and cannibalism.”

The demonstrations and rage in Ferguson and Baltimore have been more correctly categorized as “uprisings” in, for example, a review of “Whose Streets?,” a film about the birth of Black Lives Matter, and by Baltimore organizer Laurence Grandpre.

The same word should be used in Haiti. And it is, by some. 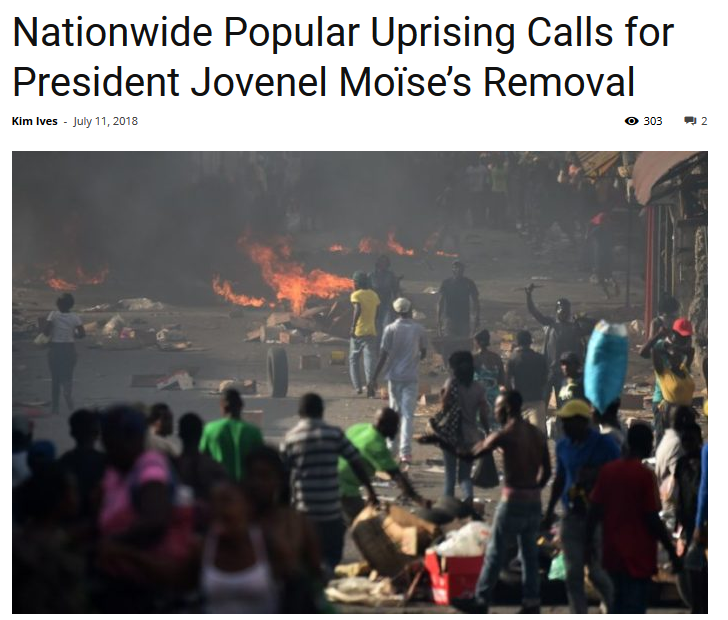 Writing in Haiti Liberté (7/11/18), longtime Haiti journalist Kim Ives explained the “uprising” as “an explosion of anger and violence [that] was building up over the past 17 months of President Jovenel Moïse’s rule, which has been characterized by corruption, waste, double-talk, repression and subservience to neoliberal dictates.” Another author in the weekly (7/11/18) called the recent wave of protests a “popular insurrection.” So did writer and university professor Gary Victor, whose words were relayed in daily Le Nacional (7/11/18).

Why are they right?

First of all, the protestors’ ire had a real class warfare aspect. Demonstrators —who were, in some cases, also looters—only went after specific businesses, not hospitals or schools nor humble mom-and-pop markets. The supermarkets, banks, hotels, a SUV dealership and gas stations targeted were establishments completely out of reach to most Haitians, over half of whom live in abject conditions below the poverty line of $2.41 per day, according to the World Bank.

The Best Western, which offers a “whisky and cigars night” each Thursday, the aptly named Oasis hotel and the Delimart supermarket chain cater to the local elite, to foreign business people, and to the staff and contractors making their living (in US dollars) in the country’s humanitarian “industry.”

Second, the rage was about much more than gas price hikes. Prices for local and foreign goods have risen by an average of almost 13 percent per year lately, according to the Haitian Institute of Statistics. As the local currency has lost value against the dollar—it’s dropped by 50 percent, just since the 2010 earthquake—the cost of everything has risen for those not earning dollars.

Over half of Haiti’s food is imported, according to the World Food Program, meaning that staples like rice, beans, corn, chicken and vegetable oil have doubled in price since the earthquake. (A 2018 study from USAID noted that “Haitians experience food prices that are approximately 30–77 percent higher than in other countries” in the Latin American/Caribbean region.

As prices have gone up, unions and workers organizations have been striking and protesting to demand that wages in the textile and other assembly factories rise from 350 gourdes per day, or about $5, to 1,000 gourdes (about $15). But the government has refused to budge. It had been able to counteract some of the inflation by subsidizing fuel prices. All food—whether produced in Haiti or abroad—needs to travel to reach the market or supermarket, as do workers and students. But the IMF wanted the subsidies gone, as part of a “staff-monitored program” that would also allegedly include more government spending on infrastructure, healthcare and other social services.

Third, most media coverage failed to note that the IMF and World Bank have been involved in “monitoring,” and in fact at least partly directing, Haitian government economic policy since the mid-1980s, when Washington-based advisors demanded that then-dictator Jean-Claude Duvalier lower tariffs protecting Haitian rice. Haitian farmers blocked highways to keep out foreign rice, but to no avail.

The next round of tariff-cuts came in 1995, as part of a series of radical neoliberal “structural adjustment” policy changes. Those “adjustments” are one of the main reasons Haiti is no longer self-sufficient in rice and other foodstuffs. Among them: privatization of state-owned enterprises, slashing of tariffs on locally produced food, and making it easier for foreigners to invest, all part of an agreement the Haitian government-in-exile accepted in late 1994, according to the Multinational Monitor (8/94).

Haitians did not take the neoliberal policy changes lightly. The mid-’90s saw repeated protests across the country by unions, peasant movements and the “Collective Against the IMF,” a multi-sectoral organization that staged marches and teach-ins. But policies remained in place.

Today, Haiti still has the lowest tariffs in the Caribbean, resulting in cheaper US and Dominican imports undercutting local food production, driving more and more people off their farms and into the swelling city slums. Media outlets parrot the World Bank’s pronouncement that Haiti is “the poorest country in the hemisphere,” but rarely ask why.

Last, the current government is the least legitimate in post-dictatorship Haiti. Ever since the two US-linked overthrows of President Jean-Bertrand Aristide (in 1991 and 2004), people’s belief in democracy has eroded. Only about 20 percent of voters even went to the polls in 2016, and since then, the president and members of parliament have been seen as tolerating and even protecting massive corruption scandals, including one involving possibly millions of dollars siphoned from Venezuela’s Petrocaribe program. A recent Jamaica Observer article (1/12/18) noted that findings related to the scandal

have been swiftly swept under the carpet. A report on the management of the funds in mid-2016 accused numerous politicians, but no legal action was taken against them. 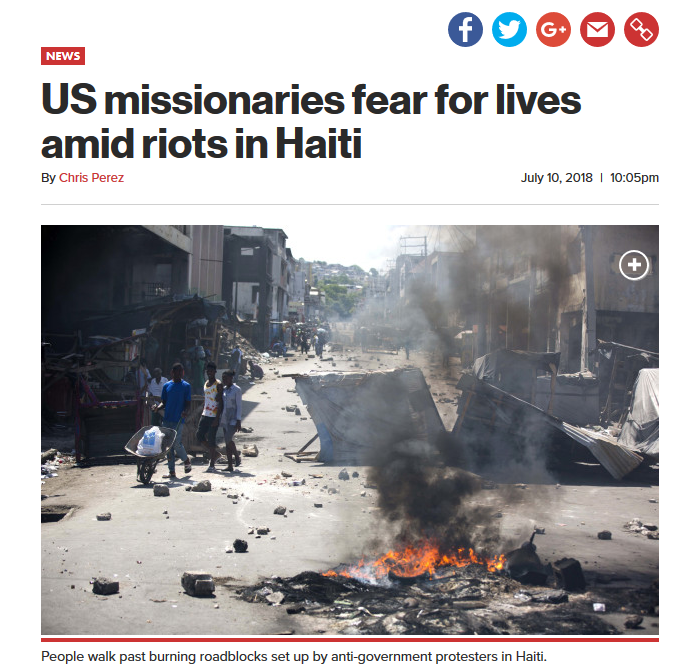 The New York Post (7/10/18) viewed the Haitian uprising primarily as a threat to US missionaries.

Haitians are also resentful of the millions of dollars in foreign aid and loans that came after the 2010 earthquake and other disasters, which seem to have had little impact on their daily lives. One more reason to take to the streets.

But most news audiences did not learn about the 30 years of forced neoliberal economic “adjustment,” decades of meddling in Haitian democracy (Russia’s not the only one!), the rampant inflation, the corruption or the damage caused by being an “NGO Republic.”

But many more worried about the plight of the trapped junior golf champion (San Diego Union-Tribune, 7/10/18) and the stranded missionaries who feared “for their lives amid riots.” (New York Post, 7/10/18).

Jane Regan has lived and worked in Haiti for about 14 years over the past three decades, working mostly with and for Haitian community and popular movement media, including Haiti Info.