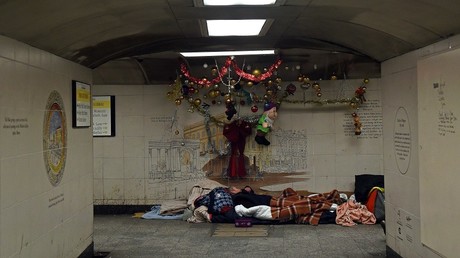 The Tories have been accused of using food banks for a coordinated PR stunt, after a string of government MPs posted smiling photos of themselves with the volunteers who feed Britain’s hungry.

It was a picture of a joyful looking Dominic Raab, the former Brexit secretary, with Tory activists promoting their work for a local food bank which seemingly triggered over a dozen more pictures of grinning Tories at similar sites, enraging many on social media.

Thank you to Tesco in Molesey and the Trussell Trust for partnering to encourage customers to generously provide food collections for families in our community, who are struggling at this time of year. pic.twitter.com/QkuCgQ8qAl

If you want to give the impression you’ve spontaneously donated to a food bank, probably best not to mostly copy and paste whatever the Scottish Tory PR office sent over… pic.twitter.com/oBVoXAMaie

Many Scottish Tory MPs suspiciously appeared to post replica tweets which led to accusations that they lacked sincerity.

Stephen Paton, online content editor at Scottish newspaper, The National, tweeted: “If you want to give the impression you’ve spontaneously donated to a food bank, probably best not to mostly copy and paste whatever the Scottish Tory PR office sent.”

Others such as Steve Peers, Professor of EU, Human Rights & World Trade Law argued that the only positive picture an MP could post would be that of a closed-down food bank because of the lack of need for one. Others accused the Tories of trying to “normalise food bank use.”

Good Lord. The “Tory MP food bank photo opportunities” tweets are actually copying a script. The only photo that could leave a positive impression is a Tory MP with a food bank closing due to a genuine lack of need for it. https://t.co/vGdlXSR1Xt

Hi @Tesco please confirm if you have more photo shoots planned with Tory MP’s to promote food banks. I’m keen to come along and speak to any of them. They are trying to normalise food bank use and saying they are just for a handful of vulnerable people, and that’s simply untrue.

This coordinated PR stunt with Tory MPs posing for photo ops at foodbanks is just disgusting.

The pictures are seriously like trophy hunter photos – disgusting sadists grinning inanely at the death and destruction they’ve intentionally caused.

Pyromaniacs taking selfies at their own fires pic.twitter.com/eI7wh2X2NK

The apparent coordinated PR campaign prompted the resurfacing of a picture of Claire Perry, the Business, Energy and Industrial Strategy Secretary and MP for Devizes with Tory activists from April 2017. The image shows an ecstatic looking Perry at the opening of a food bank in her constituency.

As @claireperrymp opens a foodbank, let’s look at her voting record: consistently voted against raising benefits, almost always voted for reducing housing benefit, & generally voted against spending to create jobs for young people. She is one of the reasons foodbanks are needed. pic.twitter.com/ySKa0Jpc09

An estimated half a million Britons rely on food banks, which Philip Alston, UN rapporteur on extreme poverty and human rights recently characterised as “the sort of activity you might expect for a natural disaster or health epidemic.”