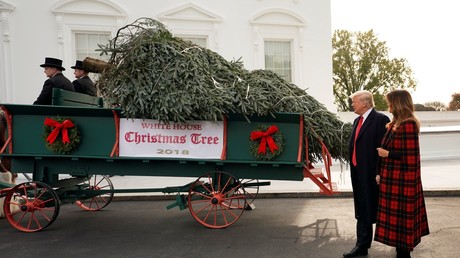 The holiday-spoiling decision was reported by Fox News on Thursday, ending weeks of speculation about whether the traditional Christmas shindig would be held this year.

In announcing the tragic news, Fox News analyst Howard Kurtz mourned the irreconcilable loss of free “lamb chops, crab claws and elaborate desserts,” not to mention the possibility of a photo op with the president and the lovely first lady.

Also on rt.com
‘Get the f**k out!’: Santa rips off beard, screams at children after fire alarm goes off


The Trumps held a Christmas party for the press last year but decided to ditch the picture-taking tradition, widely considered a sacrilege at the time.

After all, even Bill Clinton – who had been impeached days earlier – took time off from his busy “just got impeached” schedule for photos with sycophantic journalists in front of the White House Christmas tree.

Social media reactions have been divided, with some describing Trump’s decision as a brilliant cost-saving maneuver, while other gently reminded the president that you can’t cancel Christmas.

Some journalists and liberal media outlets have not taken the news so well (but it hasn’t been officially confirmed by the White House yet, so there’s always hope.)

But hey we’re still having our own party in the WH basement tomorrow so, Trump is welcome to stop by if he wants to. https://t.co/CpLeG9U9b9

Trump has soiled on many other traditions cherished by pompous media-types, including his refusal to participate in the White House Correspondents Association Dinner.