The home addresses of Republican Senators Lindsey Graham, Orrin Hatch and Mike Lee, all sitting on the Judiciary Committee, briefly appeared on Wikipedia. The edits were allegedly made from Capitol Hill.

The pages of the three Republican Senators were edited as they were attending a Senate Judiciary Committee hearing to listen to testimony from SCOTUS nominee Brett Kavanaugh and Christine Blasey Ford, who has accused Kavanaugh of sexually assaulting her in the 1980s.

The edits, which were promptly removed by Wikipedia, contained the lawmakers’ apparent home and DC addresses, home and cell phone numbers and personal email addresses. The changes have been tracked to two IPs, 143.231.249.130 and 143.231.249.136. Both are associated with the US House of Representatives according to the free IP address database.

UPDATE: Wikipedia has reverted the pages of the Republican Senators and the previous edits publishing their personal information appear to be removed from the public archive.

The two vandal IP’s, belonging to the US House of Reps. have engaged in Doxxing + Vandalism previously. pic.twitter.com/hHn7Th0OkA

The practice, which is against Wikipedia’s guidelines, is known as doxxing. Research by inquisitive Twitter users has shown that the IPs were previously temporarily blocked by Wikipedia for vandalizing other pages, both related and unrelated to politics.

A spokesman for Hatch (R-Utah) has confirmed that the edits contained the senator’s real personal details. Calling the incident “shocking,” he noted that by exposing the addresses, the perpetrators were putting the lawmakers’ families in danger. 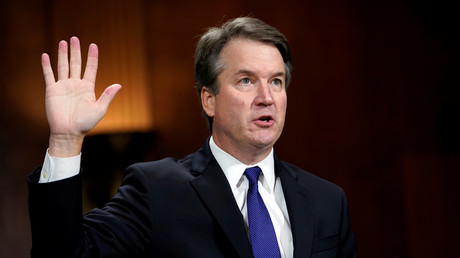 He explicitly linked the incident with the Kavanaugh hearing, calling it “just another sign of how terrible this process has gotten.”

All three Senators actively participated in the eight-hour SCOTUS nomination hearing. Graham (R-South Carolina) delivered a passionate defense of the federal judge, accusing the Democrats of trying to ruin Kavanaugh’s reputation in order to fill the vacant place with a nominee of their own choosing.

“If you really wanted to know the truth, you sure as hell wouldn’t have done what you have done to this guy,” Graham said, calling the whole process ‘the most unethical sham” he has ever seen.

Hatch echoed his words, describing the way Kavanaugh was being treated as a “national disgrace.”

Mike Lee (R-Utah), like Graham, rallied against the possibility of an FBI probe into Kavanaugh, encouraging Democrats “for the love of all that is holy” to ask Kavanaugh any questions they want right there in the hearing.

“Brett Kavanaugh is a good man, and a great judge. He belongs on the Supreme Court for the fall term, and back on the sidelines at Blessed Sacrament for the fall basketball season. Judge Kavanaugh has my vote,” Lee said in a statement in the wake of the eight-hour hearing.