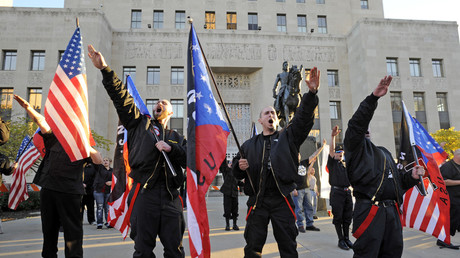 Google admitted to an over-reliance on public sources to shield itself from accusations of political bias, after its automated algorithm listed ‘Nazism’ among the California Republican Party’s ideologies, triggering a scandal.

A search for ‘California Republican Party’ on Google as late as Thursday morning listed “Nazism” as one of the party’s political ideologies in the ‘knowledge panel’ box, which popped up in the query alongside “Conservatism,” “Market liberalism,” “Fiscal conservatism,” and “Green conservatism.” The reference to Nazi ideology, which was responsible for millions of deaths under the reign of Adolf Hitler, sparked outrage from the Republicans, who are gearing up to hold primary elections in California next week.

While the reference, spotted by political strategist Eric Wilson and Vice News, was removed, Republicans lashed out against the “slander” of conservatives by the California-based company.

Google, however, brushed aside criticism, claiming that its algorithms are totally unbiased and rely on public information sources such as Wikipedia. The Mountain View company blamed the misunderstanding on “vandalism,” and stressed that it was not the result of any “manual” manipulation by Google staff.

“Sometimes people vandalize public information sources, like Wikipedia, which can impact the information that appears in search,” a Google spokesperson said in a statement. “We have systems in place that catch vandalism before it impacts search results, but occasionally errors get through, and that’s what happened here.”

The revision history in Wikipedia for the California Republican Party indeed shows that the word ‘Nazism’ was added to the article last week and removed several days later. The word ‘authoritarianism’ also graced the page on Thursday.

The scandal trended under the #StopTheBias hashtag, a Republican-led initiative designed to stop alleged prejudice against the party by technology firms. Earlier this week, House Majority Leader Kevin McCarthy (R-CA) accused companies like Amazon, Facebook, and Twitter of trying to censor out conservative Christian voices.

“This is a disgrace,” McCarthy tweeted Thursday. “Sadly, this is just the latest incident in a disturbing trend to slander conservatives. These damaging actions must be held to account.”

“Google owes conservatives answers and assurances that they are putting an end to this,” the chair of the Republican National Committee added. “Evidence is mounting that conservative voices are either being suppressed or, as it appears in this case, being falsely depicted as hateful extremists.”

Google owes conservatives answers and assurances that they are putting an end to this. Evidence is mounting that conservative voices are either being suppressed or, as it appears in this case, being falsely depicted as hateful extremists. https://t.co/zAFkCLZpfn

“It is libelous and Wikipedia and Google should take more ownership of what is published on their sites, since both companies just said 5 million Californians support Nazism,” Cynthia Bryant, executive director of the California Republican Party, told Vice News. “It is unfortunate, but is unlikely to affect the election because anyone with common sense knows we don’t support Nazism.”

The eldest child of the 45th president, Donald Trump Jr, also spoke out against Google, calling it yet another “disgusting” example of bias against conservatives.