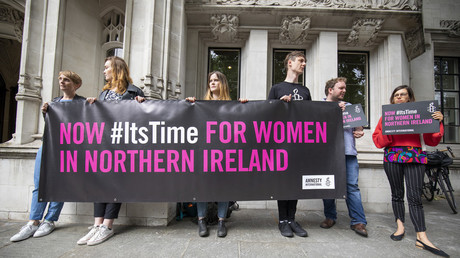 Labour MP Stella Creasy said women in Northern Ireland should have the same control over their bodies that Arlene Foster – the leader of the Democratic Unionist Party propping up PM Theresa May’s government–has over Westminster.

Creasy made the stinging comment during a Commons debate on Wednesday on whether Westminster should intervene to make abortion legal in Northern Ireland given the current absence of a devolved government.

“Is the government today really going to require a rape victim to come and give evidence in open court to be able to access this direct declaration and force them to act?” Creasy said.

“The women of Northern Ireland deserve better, they deserve control over their bodies, they deserve not to be forced to court and talk about these issues in order to get government to listen.

“They deserve the kind of control that Arlene Foster currently has over this government,” the Walthamstow MP added.

Calls for Westminster to repeal the two sections of the Offences Against the Person Act of 1861 that criminalize “procuring the miscarriage of any women” in Northern Ireland came after a pro-choice referendum in the neighboring Republic of Ireland saw an overwhelming majority vote to make abortion legal.