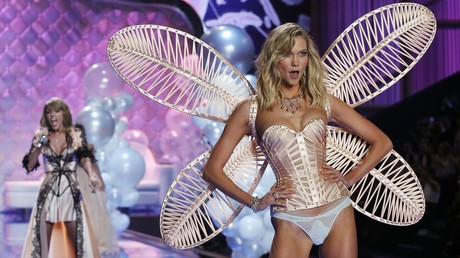 Victoria’s Secret model and girlfriend of the brother of top Trump aide Jared Kushner, Karlie Kloss, got scorched on Twitter for urging fans to “call politicians” to support a US bill limiting the separation of immigrant families.

“Politicizing the lives of these defenseless children is heartless. We have to be the voices for these kids, and I support anyone standing up to do right by them,” Kloss tweeted on Wednesday.

Politicizing the lives of these defenseless children is heartless. We have to be the voices for these kids, and I support anyone standing up to do right by them.
Call your congressperson RIGHT NOW and support the bill, US – S 3036. Speak up. #KeepFamiliesTogetherpic.twitter.com/v8UeNz3zBB

While Kloss’ followers applauded her stance, many were bemused by her call. Critics pointed fingers at her close ties to top US politicians and urged her to call them herself instead. Kloss is the girlfriend of Joshua Kushner, the brother of Trump’s senior adviser Jared.

Isn’t your boyfriend’s brother Jared Kushner? Why don’t you pick up your phone and call Jared.

Others suggested that calling Ivanka Trump, Jared’s wife, would actually have a better effect.

Some users rushed to defend her, arguing that the political standpoints of her and her boyfriend would not be that influential within Donald Trump’s close circle. Joshua Kushner is a long-time Democrat supporter, and he publicly stated that he did not vote for Trump during the 2016 elections.

her boyfriend is JOSH Kushner also she and josh voted for Hillary furthermore they cant control jared. so sit down and sut up. karlie is trying to do some good, why don’t you instead of trying to put uncalled for blame on her.

Other Twitterati argued, however, that Kloss’ words were not enough by any means and urged her to open up the coffers to fund the initiative to keep migrant families together herself.

I think celebraties would think different if their lives were taken by MS13 and their kids died from the drugs they bring into our country. Just look at all druggies in show business!

Some users pointed fingers at Democrats themselves, stating that the laws that allow the separation of migrant children from their families actually originate from the era of Democratic presidents.

then go bash the democrats. they are ones that came up with this stupid law….good grief

A similar approach to defending the “zero-tolerance policies” has been previously used by Donald Trump himself. The US president blamed “bad legislation” for the issue of separated families, while accusing Democrats of creating the problem in the first place due to a failure to enact tougher border security laws.

Separating families at the Border is the fault of bad legislation passed by the Democrats. Border Security laws should be changed but the Dems can’t get their act together! Started the Wall.

The zero-tolerance policies came into force in May, meaning that any adult coming into the US illegally would be prosecuted and any who entered with children would be separated from them while awaiting legal action.

The tough policies against illegal immigrants, specifically the issue of separating families, drew widespread criticism from human rights advocates, including the UN. The campaign against this practice, however, was somewhat damaged by the use of entirely fake and dated – Obama-era actually – photos of children in cages.