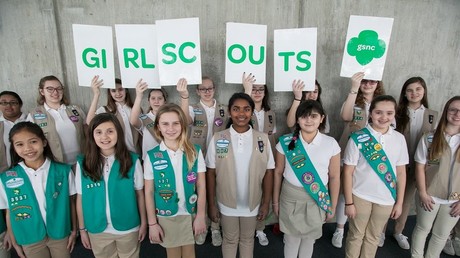 A group of Girl Scouts were the victims of an attempted armed robbery in Tacoma, Washington. The girls were selling cookies outside a store when two men pulled a gun on them.

The Girl Scouts were outside a Fred Meyer store when the incident occurred at about 6.20 pm on Saturday, police spokeswoman Loretta Cool said, the News Tribune reports. Two men in their 20s pulled a gun on the girls in an attempt to rob them. The pair left without taking any money, or cookies.

“We are saddened and disheartened to share that there was an attempted robbery at a Girl Scout booth site in Tacoma this evening,” the Girl Scouts of Western Washington said in a statement on their Facebook page. “We are grateful that no one was harmed, although of course they are shaken.”

I just read an article about people who robbed Girl Scouts at gunpoint, so what’s left of my faith in humanity has deteriorated

This isn’t the first time Girl Scouts have been the target of armed robbers. Last February, a Girl Scout and her mother were held at gunpoint outside a supermarket in Union City, California. The gunman first posed as a customer, then came back holding a pistol and stole all the cookie money, the East Bay Times reports.

Girl Scout cookies cost about $5 per box, and the average scout sells about 150-200 boxes of cookies per season.