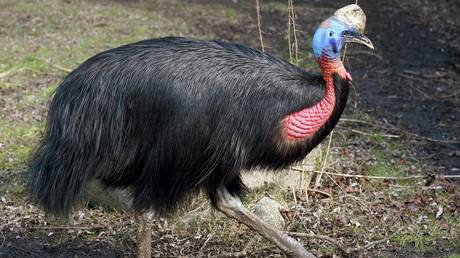 A Florida man has been jumped on and killed by a close relative of the emu, the cassowary, a human-sized flightless bird feared for its great claws and swift powerful movements. The man is said to be a breeder of the exotic birds.

The cassowary, which is native to Papua New Guinea, Indonesia and Australia, has been blamed for a vicious attack on its owner, a 75-year-old farmer named Marvin Hajos in Gainesville, Florida.

According to the Alachua County Fire Rescue Department, the heavy-built bird made a good use of its killer claws, which can grow up to 4 inches (10 centimeters) long when it pounced on its elderly owner.

Also on rt.com
Tiger in Saudi Arabia attacks man after he tries to play with it (VIDEO)


Deputy Chief Jeff Taylor told the Gainesville Sun that the bird’s attack was swift and ruthless, and apparently happened after Hajos fell to the ground. It likely took the bird, which can run up to 31 miles per hour (50 kmph), mere seconds to close in on its prey and tear him into pieces.

“My understanding is that the gentleman was in the vicinity of the bird and at some point fell. When he fell, he was attacked,” Taylor said.

Upon being called to the scene on Friday, rescues rushed Hajos to the hospital but he could not be saved and succumbed to his injuries shortly after.

The fate of the murderous bird is unclear. For the time being it has been secluded on a private property, according to the sheriff office’s spokesman Lt. Brett Rhodenizer, who called the clash between the man and the bird a “tragic accident.”


Cassowaries, which are known as “the most dangerous bird in the world” have attacked people before and are understood to pose a significant danger to both humans and pet animals. However, while there have been multiple reports of people getting injured by the bird, there has been only one known fatality which dates back to 1926 and it was not entirely unprovoked. Philipp McLean, 16, was killed by a cassowary after he hit it with his horse’s bridle for attacking his dog. In the ensuing chase, the boy tripped and fell, with the bird slicing his neck with its sharp claws.

The largest cassowary species can stand up to 1.2 – 1.7 meters (5.6 feet) in height and weigh up to 76 kilograms (167 pounds). Female cassowaries are bigger and taller than males. A special permission is needed to own cassowaries in the US, which mandates that owners must have “substantial experience” in handling the birds and keep them caged.