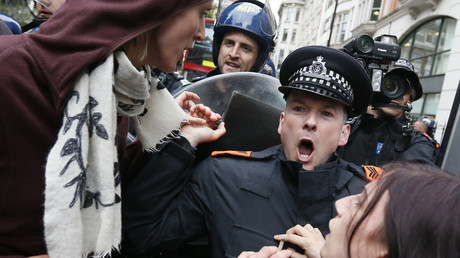 The commissioner for London’s Metropolitan police has urged the public to “do something physical” and get involved should they see a police officer being attacked.

Cressida Dick decried the practice of passersby filming police officers being attacked then posting the footage online, as “absolutely awful.”

“Officers getting assaulted and people thinking that’s funny and putting it on the internet – I think that’s disgusting,” said the Commissioner.

Dick’s comments come after a video came to prominence last month of two officers being attacked in South London. Police attempt to arrest three occupants of a vehicle before losing control of the situation, one officer is seen being dragged to the ground, while the other is fly kicked by a suspect, landing headfirst beside a moving bus.

The footage was posted online with the caption: “South London at night…lol” and shared thousands of times, while national press picked up the story.

“People stand up and say ‘that’s not right, don’t do that’ and on occasion, if they feel able, get involved and do something physical.

“You have to look at the circumstances.

“If there’s a man pointing a gun at you we don’t want you running at the man pointing the gun, that would be crazy.

A struggle in detaining one of the males developed. Another male then callously ‘fly kicks’ a female officer with such force she narrowly avoids being run over by a bus. pic.twitter.com/jTH8X06sWN

The practice of filming police officers has become more popular with the advent of smartphones and amid high profile cases of officers abusing their powers both in the US and UK.

In recent days police have come under criticism for utilizing a strategy known as ‘tactical contact,’ whereby officers use their cars to knock fleeing suspects off mopeds. A Metropolitan police driver was reportedly under criminal investigation after a teenager suffered head injuries and a broken foot as a result of being knocked off a moped during a police chase.