Gay or unmarried people who have sex must repent for their sins, a Church of England bishop has said, adding that some are “unworthy” to take Holy Communion.

Bishop of Maidstone Right Reverend Rod Thomas wrote in a letter that only after heterosexual couples have atoned for their sins should they be allowed to take Holy Communion. The letter was addressed to his superior, Bishop of Lichfield the Right Reverend Michael Ipgrave, who said last month that people from the LGBT community should be encouraged to become vicars and should always have “a place at the table.” Ipgrave also said that no one should be excluded from sacraments due to sexuality or gender identity. 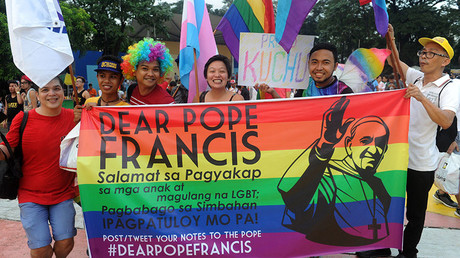 Thomas said in the letter that he would welcome LGBT people to church, but remained firm on the Church of England’s official position that marriage can only be between a man and a woman. Thomas also held his ground that church rules also “speak of the need for all sexual relationships outside marriage to be met with a call to repentance.”

“I do therefore encourage clergy to be compassionate and sensitive in dealing with the issue of repentance, but nevertheless to see it as an important part of their pastoral care,” Thomas said, adding that some were “unworthy” of joining in Holy Communion and that many churches had a policy where they “welcome those who have sought to repent.”

At the end of May, gay and transgender people were encouraged by the Church of England to become vicars, as bishops launch a new push for sexual diversity within the church. Four bishops in the Lichfield Diocese published a guide entitled ‘Welcoming and honouring LGBT people’ that says people “of any sexual orientation or gender identity feel welcomed and honoured in our churches.”

The guide, which was sent to all clergy and lay ministers in the diocese, calls for “radical Christian inclusion.” The guide also said that: “nobody should be excluded or discouraged from receiving the Sacraments of Baptism or the Lord’s Supper on the grounds of their sexual orientation or gender identity.”

Pro-LGBT campaigners in the church have voiced shock at Thomas’ letter, which they say directly opposes the diversity directive handed down less than a fortnight ago.

Reverend Colin Coward MBE wrote in a letter to the Archbishops of Canterbury and York that “in coded language and nuanced phrases Bishop Rod is subtly outlining a practice that is in direct contravention of the House of Bishops Guidance on Same Sex Marriage.

“[The House] affirmed that the Church of England should not exclude from its fellowship those lay people of gay or lesbian orientation who, in conscience, were unable to accept that a life of sexual abstinence was required of them and who, instead, chose to enter into a faithful, committed sexually active relationship,” Coward said.

“I would like to know what action you will take to ensure that the Bishop of Maidstone is made fully aware of the contents of the House of Bishops Guidance and will in his practice of episcopal ministry ensure that the Guidance is followed.”