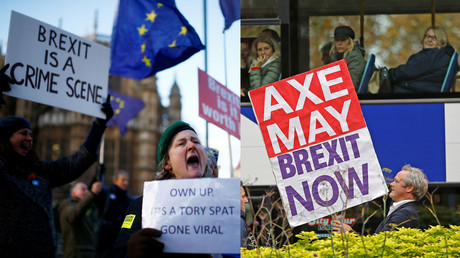 The BBC has come under fire after a Brexit-backing pastor who staunchly defended Prime Minister Theresa May’s Brexit deal on Monday’s Newsnight program was revealed to also be a paid actor.

Lynn, also known as Marina, Hayter, dressed in full dog-collar garb, urged viewers to “have faith in the government” while being rather deferential to the assembled politicians. “They know far more about what’s going on than we do,” Hayter said, as she gestured towards the participating MPs.

Hayter belongs to a tiny organization called the Seeds for Wealth Ministries, which boasts 77 followers on Facebook at time of writing.

The ministry is closer to US evangelical churches than the Anglican tradition and promises to “help you realise, release and walk into your financial freedom in Christ.”

Eagle-eyed viewers thought they recognized Hayter but couldn’t quite put their finger on it at first; and then came the deluge of outrage on Twitter once she was discovered to also work as an actor.

Lies lies lies.
She is a paid actor. It is her job. She is not an ordained pastor – she is a right-wing, Trump supporting fantasist who calls herself a pastor.
Using an actor posing as a member of the public to support the government is a RESIGNING matter.

According to her online CV, Hayter has appeared as an extra in Star Wars: The Force Awakens (bartender), Wonder Woman (market stall holder), King Arthur (villager), Bourne (executive business woman) and even reaching the illustrious heights of Eastenders as a ‘drunkard.’

The torrent of scrutiny and outrage forced the BBC to respond publicly.

Claims that Lynn appeared on #newsnight as a paid actor are false. Lynn is a pastor and was a genuine participant of our Brexit debate. She carries out work as an extra using her middle name but this is not relevant to the capacity in which she appeared. #VicarGate

You do realise how this kind of thing undermines trust in the BBC though, don’t you?

It begs further questions surrounding the selection of participants.

Who does selection?
On which criteria?
Are they ‘vetted’?
Are they truly representative of public opinion?
etc.#Vicargate

@BBCNewsnight when you’re in a hole, the best strategy is to stop digging. If you make an honest statement about this now it will be less painful than if you continue to try and bluster it out.

She’s been spotted in three shows so far and your response is just dissembling. How did you select the panel, why has she made multiple appearances and why was she not more thoroughly introduced? If you want Newsnight to keep any shred of respectability you need to investigate

Others felt people were losing the run of themselves and reminded the baying mob that preachers can seek gainful employment elsewhere at the same time as delivering ‘the good word.’

While many questioned Hayter’s credentials as a pastor, her political beliefs seem to be both genuinely held and staunchly conservative, given her support for Theresa May.