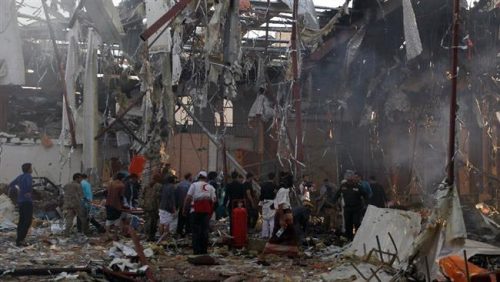 While Americans are mourning the mass shooting in Las Vegas that so tragically took the lives of over 50 concert-goers, people in Yemen will be marking the one-year anniversary of a tragedy that took the lives of over 140 people who were not at a concert, but a funeral. The Las Vegas carnage was a crime against humanity carried out by what seems to be a crazed lone wolf. The bombing of the funeral home in Yemen’s capital, Sanaa, was a war crime carried out by a close US ally, Saudi Arabia, with the indispensable help of the United States. While we try to steer the domestic conversation to the need for gun control, we should also be seeking to end the massive flow of US weapons to Saudi Arabia that is wreaking such carnage. A new resolution in Congress, HR Resolution 81, would do just that.

The funeral bombing took place in the afternoon of October 8, 2016, when several hundred people had gathered to mourn the passing of Ali al-Rawishan, a public figure and father of the Sanaa-based administration’s interior minister. It was attended by several hundred people, including colleagues, friends, and relatives of the deceased. Funeral ceremonies of public figures in Yemen are customarily well-attended and open to the public.

At about 3:30 p.m., the mourners heard the buzzing of a plane overhead. Suddenly, a massive bomb penetrated the roof of the hall, causing carnage and mayhem. As the rescuers ran in to help, another bomb exploded. Photos and video footage taken…