Supporters of right-wing activist Tommy Robinson have decried his imprisonment for contempt of court, stating his right to freedom of speech has been attacked.

The former English Defence League (EDL) leader, who recently rebranded himself as an independent video journalist, has received huge support from his social media followers, with #freetommy trending on Twitter, along with his image being emblazoned on British flags across many tweets on Twitter, following his arrest for “contempt of court”.

Free speech in the UK is truly dead. Islam has infiltrated government and universities. #FreeTommy

His supporters insist freedom of speech is at stake, while critics say he was actually putting the successful outcome of criminal trials at risk.

Tommy Robinson has been jailed for 13 months after being arrested outside Leeds Crown Court. The media must now stop giving this criminal and fraudster any airtime to spread his hatred, racism and division. Well done to British law and the judge who has put him behind bars.

Extraordinary – it appears, after all the protests and Roseanne and #justicefortommy, that Tommy Robinson *admitted* committing a contempt of court by publishing details which could prejudice a grooming trial https://t.co/b4T6kicr7g

So why was Robinson jailed and why couldn’t the media report on it until now?

Robinson, whose real name is Stephen Yaxley-Lennon, was broadcasting on Facebook Live outside the Leeds Crown Court to report on a grooming trial on Friday, when he was stopped by police.

The Evening Standard reported that he was arrested by police initially for ‘breaching the peace’ outside the courthouse. He was already serving a suspended sentence for committing contempt of court over a gang rape case heard in Canterbury in May last year.

He was warned that committing further offenses would result in imprisonment – which consequently happened on Friday. Judge Geoffrey Marson QC told Robinson: “With those rights [free speech] come responsibilities. The responsibility to exercise that freedom of speech within the law.

“I am not sure you appreciate the potential consequence of what you have done.” 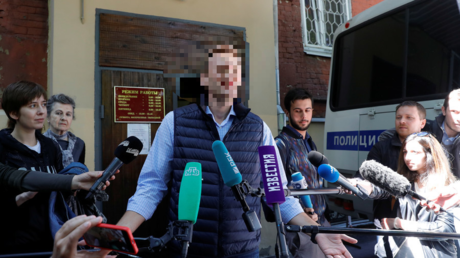 Robinson’s actions outside the court, namely his Facebook live broadcast, found him in “contempt of court”. Subsequently he’s been handed a 13 month jail term.

The Contempt of Court Act 1981 protects the integrity of court proceedings in the UK – it makes sure that defendants receive a fair trial and makes any actions that could prejudice proceedings, (i.e. publishing something that could influence a jury) an offense.

Former Chief prosecutor Nazir Afzal suggests that offenses like Robinson’s can lead to a trial collapsing, as the jury may be hampered in delivering a fair verdict.

Afzal, who helped convict the infamous Rochdale grooming gang, which was the focus of the BBC award winning drama ‘Three Girls’, has said in a tweet that they “nearly lost the so-called Rochdale grooming case (#ThreeGirls) cos of a far right communication.”

He added: “Their lawyers applied at their trial that the jury had been prejudiced by Far Right. We had to fight to persuade Court to allow trial to continue. Those criminals came close to being freed & victims close to getting NO justice. Jury must decide on EVIDENCE, not on your OPINION.”

2/2 Their lawyers applied at their trial that the jury had been prejudiced by Far Right
We had to fight to persuade Court to allow trial to continue
Those criminals came close to being freed & victims close to getting NO justice
Jury must decide on EVIDENCE, not on your OPINION

Jones goes on to highlight the case of a “senior member” of the far-right EDL, who was jailed earlier this year for sexually abusing a 10-year-old schoolgirl dozens of times. He and others on social media ask why Robinson wasn’t breaking reporting restrictions outside that courthouse?

No, “Tommy Robinson” is not a martyr of free speech.

Sick of seeing free Tommy Robinson posts. Where was he when white paedophile trials were going on? Jimmy Saville, Rolf Harris, Not a dickie bird from ‘our Tommeh’. He only targets Muslims, because he’s a racist ex-con with an assumed name who just loves to stir up racial hatred.

Why Tommy Robinson needs to go to prison. This is about what he did to jeopardise the court case of groomed girls. They need their justice. And he has impeded on that. Why did he not wait for their conviction. And why does he not protest white paedophiles? Think. Think. Think :) pic.twitter.com/TQ2XxN4t0n

There are many white British grooming gangs and paedophiles, I don’t see Tommy Robinson crying about those – he cares about the race and religion, not the victims and anyone who believes otherwise is blind.

But in the case of Robinson, various media outlets felt the judge had gone too far and successfully challenged the restrictions imposed on reporting.

Robinson pleaded guilty to contempt of court and breach of a suspended sentence, reports the Hull Daily Mail. His barrister told the court Robinson felt “deep regret” after becoming aware of the potential consequences of his actions.