A group of petty officers assigned to a US submarine base have been charged with engaging in group sex with a girl younger than 16 and filming it. A criminal investigation was launched after an anonymous tip-off.

The incident, reported by the Navy Times on Friday, allegedly took place on September 17, 2017, and had not been made public up until now. According to the charge sheets, obtained by the publication, the four officers engaged in sexual acts with the girl in barracks at the Naval Base Kitsap-Bangor in Washington state. It’s unclear how the girl, said to be between 12 and 16 years old, was sneaked into the military base. 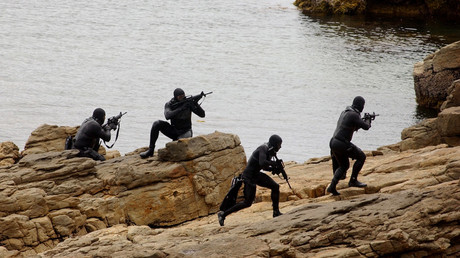 A criminal investigation was launched by the Naval Criminal Investigative Service after the base authorities received an anonymous tip-off several days later, on September 26.

It took the Navy a year to trawl through evidence and file charges against the suspects, with hearings on the case taking place this week. The hearing officer will decide whether the four men will be court-martialed or tried in a civilian court.

Two of the accused sailors are assigned to USS Nebraska, an Ohio-class ballistic missile submarine. One of them is accused of failure to report a crime and engaging in a sexual act with a minor during a three-day period, between September 19 and September 21.

Two of the accused sailors are assigned to USS Nebraska, an Ohio-class ballistic missile submarine. One of them is accused of failure to report a crime and engaging in a sexual act with a minor during a three-day period, between September 19 and September 21.

One defendant has been serving at USS Henry M. Jackson, another Ohio-class ballistic missile submarine. He faces charges of making child pornography.

The fourth officer is deployed to the Naval Submarine Support Center Bangor, a former marine base and now a part of the Kitsap-Bangor base.

The scene of the alleged crimes, Naval Base Kitsap-Bangor, is the third largest US Navy base and features one of its four nuclear shipyards as well as one of two strategic nuclear weapons facilities. The base provides support for ballistic missile fleet and nuclear submarines, as well as surface ships.

Instances of sex crimes involving children are not uncommon among Navy officers. In August, a court-martial trial began for an officer who was accused of four counts of sexual assault of a child between 12 and 16 at Virginia’s Langley Air Force Base in September last year. Ensign Kevin Ortiz also faced the charge of attempting to molest a girl by sending her lewd text messages.

In a recent report by the Pentagon’s RAND Corporation, Navy ships and training bases were named as carrying the highest risk of sexual misconduct, in particular, to young female service members.