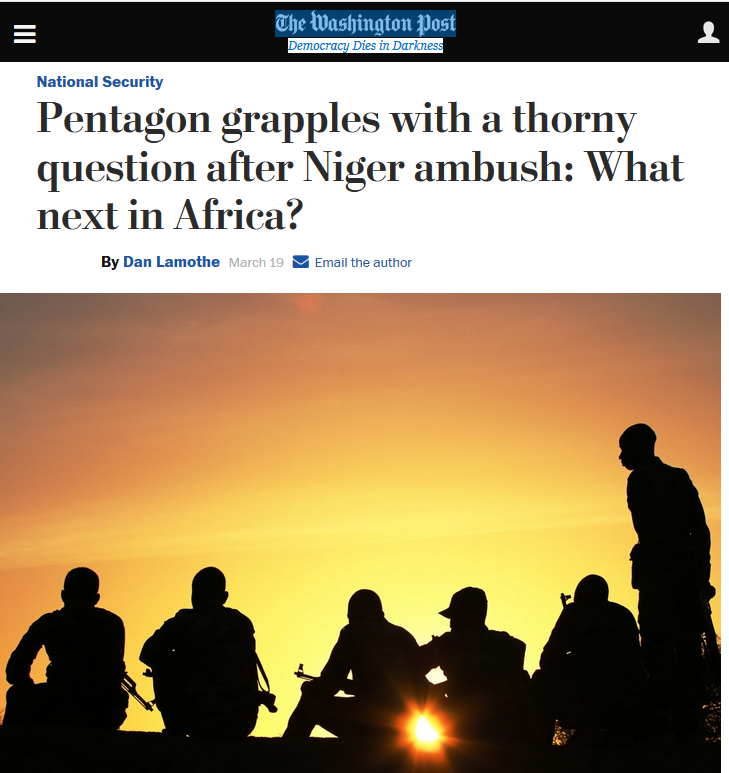 The Washington Post (3/19/18) thinks the question is thorny, so it makes sure to prune the answers.

“Pentagon Grapples With a Thorny Question After Niger Ambush,” a recent Washington Post headline (3/19/18) read: “What Next in Africa?”

Among the possible answers not considered by the Post article: “Close US military bases,” “End US drone strikes” or “Stop US special forces raids.”

While the question of US military intervention in Africa is one that deserves deep interrogation and investigation by journalists, the Post approaches it by assuming the benevolence of America’s aims on the continent, and fails to question the strategic value of endless war.

Post national security reporter Dan Lamothe reports that the four US Green Berets killed in Niger last October “did not have air support for an hour after calling for help, leaving it vulnerable as a larger force of about 50 militants attacked with rifles and machine guns.” According to the Post, the ambush “underscores the danger of dispersing small teams across a vast continent where the Pentagon does not have the same level of support for its service members as it does in a country such as Iraq or Afghanistan,” where US forces “have a more robust network of fire support, aerial surveillance, medical help and quick-reaction rescue units when a crisis erupts.”

By juxtaposing the US military presence in “hot battlefields” like Iraq and Afghanistan with its role in places like Niger and Somalia—sometimes referred to as being outside of “areas of active hostilities”—the implied answer to the question “What next in Africa?” is something along the lines of, “Expand US military infrastructure in Africa to protect and provide support for US special forces who will inevitably engage in hostilities.”

The goal is not to prevent US casualties—and, more importantly, the devastation inevitably wreaked by the most powerful military in the world—by, for example, withdrawing US forces from the continent. For the Washington Post, US military presence in Africa is assumed—not challenged or questioned in any meaningful way.

“Sometimes, the knee-jerk reaction when something bad happens of, ‘Get them out of there,’ that’s not a particularly good response,” he said.

What’s wrong with that response? The Post doesn’t ask.

The only space the Post gives to dissent in this case is to Erik Goepner, a visiting research fellow at the Cato Institute and the last person quoted in the article:

The Post doesn’t follow up on the questions Goepner raises about how the US will intervene militarily in Africa. But left completely out of the discussion is anyone who thinks the US military shouldn’t be intervening in Africa at all. That ensures that the answer to “what next in Africa?” will always involve endless war.