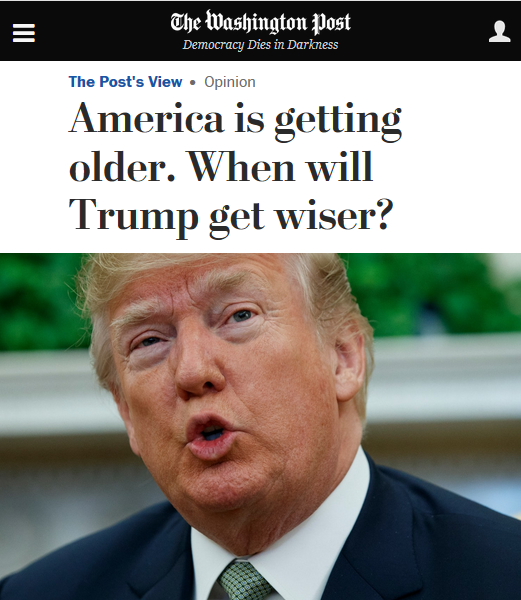 By “wiser,” the Washington Post (3/19/18) means embracing “trims to entitlements.” And by “trims,” they mean taking trillions of dollars from the elderly.

It’s hard not to have a certain attachment to the Washington Post‘s longstanding crusade against Social Security and Medicare. After all, it has been pushing for cuts to these programs at least since I came to town in 1992. They did in the high-deficit years of the early 1990s, the boom times of the late 1990s, the housing bubble years of the 2000s and through the Great Recession. The Post calling for cuts to these programs is pretty much as predictable as the sun coming up. So this morning’s call for “reform” (3/19/18) is a bit like the morning coffee, although somewhat less pleasant.

At the most basic level, you sort of have to love the Post criticizing politicians for not wanting to go on record for cuts to these programs, even when the editorial writers, who don’t have to run for office, are scared to say what they actually want, and instead use the euphemism “reform” when they mean cuts. But the substance is also a bit hard to take.

Suppose we get to the years when these programs face a shortfall and simply raise taxes enough to meet the tab. Yes, this would mean a hit to workers at the time, and would be unpopular. But since the programs are hugely popular, there quite likely would be public support for higher taxes, precisely because of the demographics described in the Post:

That is, 21 percent of the entire population will be on Medicare, Social Security or, in most cases, both. Just five years thereafter, in 2035, the number of 65-and-overs will surpass the number of Americans under 18 for the first time in the nation’s history.

Would it be a disaster if we had to raise taxes to pay for these programs? Well, we raised taxes by amounts comparable to the projected shortfalls in the decades of the ’60s, the ’70s and the ’80s, so tax increases have precedents.

It’s also important to keep in mind that average wages are projected to be more than 25 percent higher in 2035 than they are today. This means that after-tax wages would be more than 20 percent higher in 2035 even if we raised the payroll tax by 3 percentage points. (I’m not saying this is the best way to close the projected shortfall, just pointing out the arithmetic.)

People can rightly make the objection that most workers have not seen much gain in wages over the last four decades, as most of the benefits from growth have gone to high-end earners like CEOs, Wall Street types and upscale professionals like doctors and lawyers. That’s an important point, but that would suggest we focus on policies to reverse this upward redistribution, which has cost workers hugely more than any remotely plausible increase in the payroll tax. (Yes, this is yet another pitch for my [free] book, Rigged: How Globalization and the Rules of the Modern Economy Were Structured to Make the Rich Richer.)

If the Post were interested in free trade, we could also do a lot to directly reduce the cost of Medicare and Medicaid by bringing in more foreign doctors and ending patent monopoly financing of prescription drug research. But we know the Post is only interesting in cutting the wages and benefits for ordinary workers, not doing anything that would jeopardize the incomes of rich people.

Finally, people should be completely disgusted by hearing for cuts in these programs from a paper whose austerity policies have literally cost the country trillions of dollars in wages over the last decade. Maybe if Post editorialists acknowledged their mistake, their ideas might deserve an audience, but surely not now.

A version of this post appeared on the Center for Economic and Policy Research’s blog Beat the Press (3/19/18).