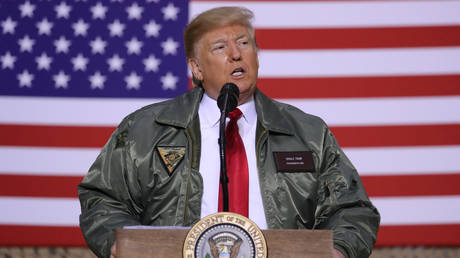 US President Donald Trump has (figuratively) come under fire for his fashion sense while on a surprise visit to US troops based in Iraq.

As news broke that the US would be withdrawing combat troops from Syria, Trump and First Lady Melania flew out to make a surprise presidential visit to active combat troops at al-Asad airbase, west of Baghdad.

The First Couple have faced scorn from the fashion police before, most notably The Donald’s makeup and hair and Melania’s own edgy choice of a jacket emblazoned with the words “I really don’t care, do u?”


Now, however, the US president’s oversized bomber jacket has inspired that latest wave of derision and memes, with the pop culture references spanning the past three decades or more.

US heroes ranging from NFL star Tom Brady and General Patton, to Kardashian stalwart Kendall also got a mention.

I felt like such a fool when I realised this wasn’t real. I mean, obviously. How could her arm be that big. But in answer to your question, yes pic.twitter.com/fjHVgUVq24