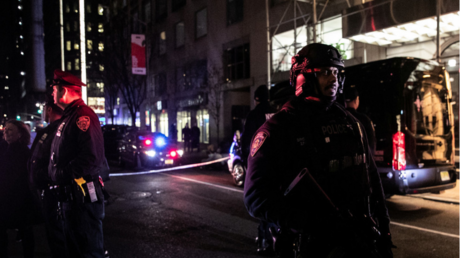 A 17-year-old has been shot dead by police in Lakeland, Florida, after allegedly driving a vehicle at officers and civilians upon being ordered to stop.

Surveillance footage shows the dramatic incident, with police closing in on the vehicle before the driver attempts to flee, crashing his way through a parking lot while under fire.

The victim identified as Michael Jerome Taylor, 17, of Winter Haven, was a part of a large crowd gathered in a Lakeland parking lot, following the closure of a nightclub. At 2.21am, Wednesday officers arrived to find up to 200 people ‘loitering’ in the lot.

Upon arriving, police noticed a black Camaro that had been reported stolen from the same parking lot. Officers then moved toward the vehicle which was being driven by Taylor, when the suspect attempted to drive away at speed, placing the officers and the public in “immediate life-threatening danger,” according to police, they opened fire.

The video shows the car driving away from the majority of officers, who have gathered – guns drawn – at the car’s rear.

The car – being fired upon – continued to travel through the lot hitting other vehicles, a pole and crashing into a wall. As it moved a passenger fell from the Camaro, allegedly telling officers that there was a firearm inside the vehicle.

When the car stopped, officers took Taylor from the vehicle they administered first aid, before he was taken to a nearby hospital where he died. It is currently unknown how many times he was shot or how many rounds officers fired.

According to police, Taylor was on felony probation as a violent offender of special concern under the anti-murder act for robbery with a weapon, burglary while armed, fleeing and eluding with a high-speed chase, burglary conveyance, and grand theft auto. Local reports confirmed that there was a loaded firearm inside the Camaro.