A family in Florida is seeking justice after a jury awarded them a total of 4 cents in compensation for the death of their father, killed in his own garage by police officers who arrived on a noise complaint.

Gregory Hill Jr., 30, was fatally shot in January 2014 by St. Lucie County Sheriff’s Office Deputy Christopher Newman who, along with his partner Edward Lopez, responded to a complaint about a man listening to loud music.

“After Newman knocked on the doors, the garage door opened revealing Hill within the comfort of his own garage and home,” the lawsuit claimed. “Upon information and belief, Deputy Lopez indicated loudly that Hill had a gun and then the garage door closed. Despite the door being closed, Newman fired his handgun approximately four times and killed Hill.” 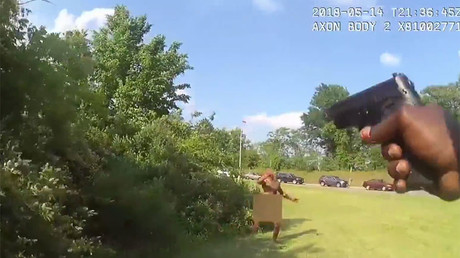 Two of the bullets struck the father of three in the abdomen, while another pierced his head. A SWAT team that was called to the scene discovered the deceased with an unloaded 9mm handgun in his back pocket.

Newman said he was forced to respond because the man was allegedly pointing a gun at him. Hill’s family, who filed the lawsuit in 2016, disputed that claim. Viola Bryant, Hill’s mother, argued that police violated her son’s Fourth Amendment right against unreasonable searches and seizures by using excessive force.

The federal court jury deliberated for nearly 10 hours before declaring that Hill was 99 percent liable for the incident and the fatal injuries he received, because he was under “the influence of alcoholic beverages.”

Last week, the court awarded Bryant $1 for funeral expenses and $1 to each of the children for the “loss of parental companionship, instruction, and guidance and… mental pain and suffering.” But because the jury decided St. Lucie County Sheriff Ken Mascara, in his official capacity, was somewhat negligent – but only 1 percent liable – the total of $4 was reduced to 4 cents.

While the Sheriff’s Office praised the verdict, the family and their lawyer, John M. Phillips, appealed for public support and launched a fundraising campaign demanding justice for Gregory Hill, who left behind three small children, aged 13, 10, and 7.

This was my 2nd case involving loud music… this time by police. A jury awarded $4 last week. He was minding his own business listening to @Drake when police arrived and spent less than 60 seconds on his property. He opened and closed his garage door deescalating the situation.

The family maintains that the evidence in the case doesn’t add up and they will appeal the verdict. They argue that one of Hill’s daughters, who witnessed the murder of her father, along with other witnesses across the street, saw no gun in his hand. They further claim, citing forensic testimony, that the gun was free of any blood or brain splatter, and that Hill would have been incapable of putting the weapon back in his pocket after he was shot. They also dispute Newman’s testimony that he ordered Hill several times to put down his weapon, and claim the officers only yelled “hey” before firing.