Dinosaur King is a 2007-8 animated TV series based on a Japanese card game of the same name.  It has all the elements that would appeal to pre-teen boys. There doesn’t seem to be anything sexual about the series.  Netflix describes it as follows:

2007 78 eps TV-Y7 FV
Aided by tablets found near a downed meteorite, Max, Rex and Zoe race the evil Alpha Gang as they travel the globe in search of living dinosaurs.

For those programs where fantasy violence may be more intense or more combative than other programs in this category, such programs will be designated TV-Y7-FV. Most parents would find this program suitable for all ages.

There doesn’t seem to be any indication that this would include sexuality of any type, nor that such programs would be themes of a so-called adult nature.

One of the features of Netflix is that after watching a program, Netflix makes recommendations of other offerings that might be of interest based on watching and liking a certain program.  Based on my 12-year old son’s viewing of Dinosaur King, Netflix kindly recommended fifty other programs “Because you watched Dinosaur King.” 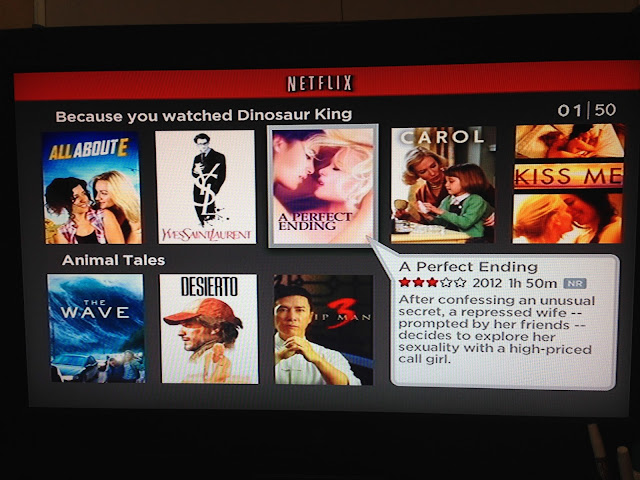 All of the 50 recommendations say explicitly: “Because you watched Dinosaur King.”  I took screenshots of all of them.  The icons for almost all of the films are pretty racy.

I broke down the themes, ratings, and years of the 50 recommendations:

A sample of these Netflix recommendations: