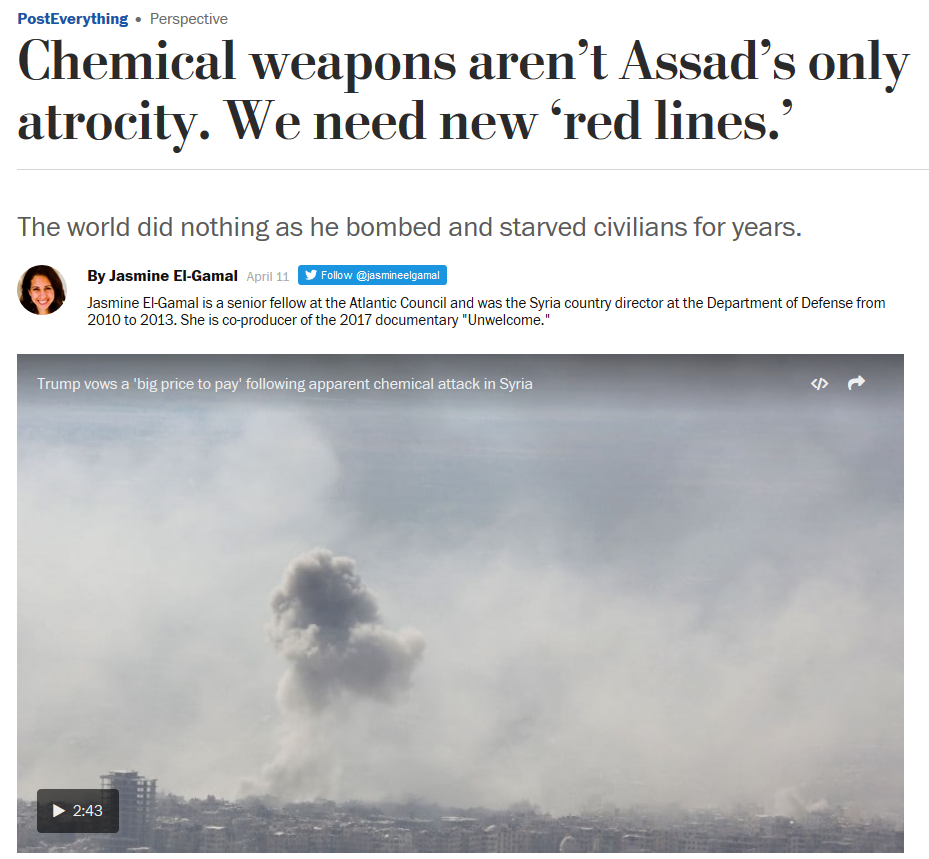 This Washington Post op-ed (4/11/18) was one of several that promoted the myth that “the world did nothing” to Syria.

The curators of American public opinion at the three most influential broadsheets in the United States have decided that dissent from the build-up to new airstrikes on Syria is not really an opinion worth hearing. Of 16 columns leveling an opinion about “fresh” airstrikes on the Syrian regime in the coming days, only two—both in the Washington Post (4/12/18, 4/12/18)—opposed the airstrikes. No New York Times or Wall Street Journal opinion piece came out against a renewed attack on Syria.

Ten expressly supported the airstrikes (three in the Times, five in the Post and two in the Journal), two did so by implication (both in the Times, both lamenting the US “doing nothing” in Syria), two were ambiguous and two were opposed to the airstrikes. A complete list of the columns can be reviewed here.

This is slightly less unanimous than the level of support Trump’s airstrikes on Syrian air bases received from the media last year, when only one out of 47 editorial boards failed to back the escalation (FAIR.org, 4/11/17).

On the issue of launching airstrikes against the Assad government, robust debate is nonexistent. Major publications take the bulk of the premises for war for granted—namely the US’s legal and moral right to wage it—and simply parse over the details (FAIR.org, 4/12/18). The Washington Post editorial board (4/9/18), unsatisfied with what they view as token airstrikes, calls for Trump to not just launch “a few cruise missiles,” but for a “concerted strategy” of open-ended “US military initiatives.” This, of course, includes additional permanent military bases scattered throughout Syria.

As Trump and leaders from France and Britain gear up for war in the coming days, if not hours, perhaps opinion editors could make a little more space for those who oppose the possible opening up of a whole new theater of war.