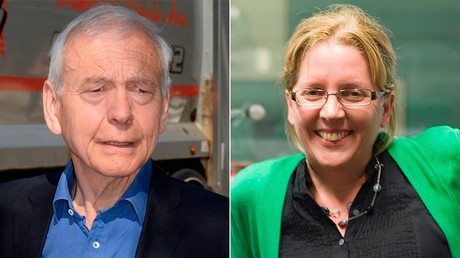 Carrie Gracie was forced to sit in silence as the highest paid male presenter on BBC’s Today program interviewed another woman about Gracie’s own resignation over pay, because of BBC impartiality rules.

BBC’s China editor, Carrie Gracie, announced her resignation on Sunday in protest over the gender pay gap at the taxpayer-funded organization. She said the BBC was “breaking inequality laws” in an open letter published on her website.

“I am not asking for more money,” Gracie said.

“I believe I am very well paid already – especially as someone working for a publicly funded organisation. I simply want the BBC to abide by the law and value men and women equally.”

In response to the pay-gap debacle, the BBC has reportedly banned any reporters who have tweeted about the Gracie issue from presenting news stories on the subject.

It is understood that senior BBC editors met on Monday. Management have reportedly advised staff in the meeting to enforce the BBC’s impartiality existing guidelines in relation to the story.

“The message was ‘Anyone in any capacity who has tweeted about it, then those people cannot do equal pay stories’,” a source told BuzzFeed.

In an odd turn of events, Monday’s Today program on BBC Radio 4 was co-hosted by Gracie and John Humphrys – the national broadcaster’s highest paid news presenter.

Due to impartiality rules, as Humphry interviewed Mariella Frostrup about equal pay and Gracie’s own resignation, the now-former China editor was made to sit in silence, disallowed from joining the discussion.

It’s completely absurd that John Humphrys gets to conduct an interview about equal pay, when his salary is at the heart of it, while the woman who *is* the story must sit in silence next to him because “impartiality rules”.

The Twitterverse was quick to point out the irony of the situation.

In July last year, the BBC was forced by government request to reveal the salaries of all employees earning more than £150,000 ($203,000) a year. Humphrys earns between £600,000 and £649,000 a year. Gracie famously revealed her salary on air during the MPs’ expenses scandal: a measly £92,000 a year when compared to Humphry’s swelling coffers.

Very struck by the total lack of outrage from the numerous BBC luvvies on my timeline at my revelation that our (female) ambassador to China on 120k while our male ambassador to Washington on 180k.

A BBC spokesperson had defended the BBC’s pay structure, stating that the national broadcaster performs “considerably better than many and are well below the national average.”

“Alongside that, we have already conducted an independent judge led audit of pay for rank and file staff which showed ‘no systemic discrimination against women,’” the spokesperson said.

“A separate report for on air staff will be published in the not too distant future.”